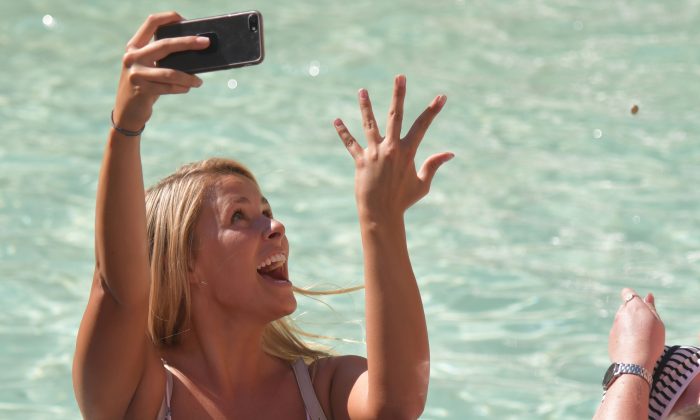 A woman snaps a selfie as she throws a coin in the Trevi Fountain in Rome on June 21, 2017. (Tiziana FabiAFP/Getty Images)
Europe

The $1.7 million from coins thrown into Rome’s famous Trevi fountain each year will continue go to charity, after the mayor scrapped plans to spend it on the city’s crumbling infrastructure, following a show-down with the local Catholic church.

Thousands of coins fly into the fountain every day, tossed by tourists over their right shoulder as per guidebook instruction, in what they are told is a traditional wish to guarantee a return visit to the Eternal City.

But that particular explanation is just the one that suits the patter of the tour guides. According to the official Trevi Fountain website, a more significant reason for the coin toss tradition is that it was invented to pay for the fountain’s upkeep.

The coins had been earmarked once again for the city’s upkeep by Mayor Virginia Raggi as she tried to claw back money for the indebted city.

But for the past 18 years, the coins from the fountain—estimated to be worth up to 8,000 euros ($9,100) per day—has gone to a local Catholic charity, making up about 15 percent of its annual budget to help the city’s poor and homeless.

After backlash from the local church and growing rancor on social media, Raggi relented.

The new plans, already approved by the city council, were due to come into effect in April, according to the BBC.

“The gift that comes from the Trevi Fountain in Rome is a rain of coins that creates a sea of good,” Rev. Benoni Ambarus, director of the charity Caritas, told Italian newspaper Avvenire. “I refused to think about closing services for the poor.”

“I still hope that the trust in Caritas will be reconfirmed, that we will be able to find a way that intertwines reasonableness, solidarity, and the joy of coin tossing, to keep this network of help alive.”

All a Misunderstanding, Says Mayor

But Raggi said that it was all a misunderstanding, according to the newspaper L’Osservatore Romano, and that the charity would continue to receive the money from the Trevi Fountain. She said the charity would also receive the coins tossed into any of the city’s historic water features: worth an extra 200,000 euros a year ($228,210).

“No one ever thought about depriving Caritas of these funds,” she told the newspaper on Jan. 14. “The diocesan agency plays an important role for many needy and for the city of Rome, which wants to continue to be the capital of welcome for the weakest.”

The tradition of the coin toss was embedded in popular culture by Frank Sinatra’s 1954 romantic comedy “Three Coins in the Fountain.”

According to the Trevi Fountain website, the coin toss comes from two traditions: “First, the ancient Romans used often to throw coins in fountains, rivers, or lakes to make the Gods of water favor their journey and help them go back home safely. Second, this tradition has been invented to raise funds for the maintenance of the fountain.”

The 85-foot-tall fountain in its current form was designed in 1730 after a competition. The cheapest design won and cost the city 17,647 scudos (papal currency), paid for by a city-wide lottery in 1732. The work was completed 11 years later.

The fountain, which pours out 2,824,800 cubic feet of water a day, gets its name from the Travertine stone (now popular in many bathrooms)—the same stone used to build the nearby Coliseum.