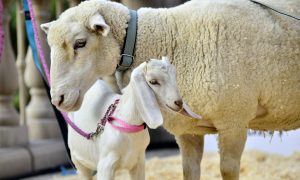 Are You Supporting This Cruel and Dumb Charity?
0
Share Now
TelegramFacebookTweetEmailTellMeWeReddit
Copy Link
US

NEW ORLEANS—Ten years after the levees and floodwalls broke during Hurricane Katrina and flooded New Orleans, the Big Easy finally has a full-scale public hospital again — a new Charity hospital.

At 6 a.m. Saturday, the new 1.6-million-square-foot University Medical Center New Orleans, built with $1.1 billion of federal rebuilding money, ambulances and medical staff began the transfer of 200 patients into the new hospital for its first day of operations. Orchestrating the move required closing down streets as ambulances take patients into the facility, affectionately also called the “Spirit of Charity.”

Clouds Over Charities for Refugees in Islamic Countries

In addition, the system’s 500-strong staff of doctors, specialists, nurses and office workers will move in too.

Since Katrina, medical services have been scattered across the city. Thus, the opening of the UMC complex — an artfully designed state-of-the-art hospital — signals a return to top-notch medical care.

The hospital will serve anyone, whether they can pay or not, the hospital has promised.

“It will be a safety net hospital,” said Dr. Peter DeBlieux, UMC’s chief medical officer and director of emergency services.

The UMC complex is the successor to the towering 1930s-era Charity Hospital, a 1-million-square-foot Art Deco downtown institution much loved in New Orleans. In tandem with the UMC campus, a new adjoining U.S. Department of Veterans Affairs hospital is slated to open next year.

The move to not reopen Charity — over the objections of many — and build a new hospital district was anything but easy. City, federal and state officials forced hundreds of homeowners and businesses to relocate from neighborhoods founded by a mix of European immigrants — Jews, Germans and Eastern Europeans — and African-Americans. Angry protests, allegations of wrongdoing, lawsuits and evictions ensued.

Although blighted, the neighborhood was famous for several notable landmarks, including the Deutsches Haus, the Dixie Brewery and its Nick’s Bar, numerous elegant homes and its Jazz-era lore. Pockets of resistance held out until the bulldozers came in.

Even before Katrina struck Aug. 29, 2005, developers had tagged the area as prime for redevelopment into a biomedical corridor. With a price tag at $2 billion, the hospital corridor is one of the largest public works projects undertaken during the reconstruction from Katrina.

Today anger over Charity’s closing has subsided and the city has mostly embraced the project.

The UMC complex is as much a hospital as an architectural endeavor and civic statement. It is a lavish expression of glass chandeliers, space-age like furniture, silent Buddhist-like ponds — all under soft lighting and splashed with soft colors. Critics have said its exteriors do not fit in New Orleans.

New Orleans has a long and distinguished medical history and the city’s university-run hospitals attract medical students by the thousands. As Charity was before, the new hospital will function as a teaching hospital too.

DeBlieux said having the new hospital open will “raise the standard for health care across the region.”

While the hospital will serve any person off the street, it also aims to attract paying customers and make profits. The new medical center is being run by LCMC Health, a private not-for-profit health care system that includes Children’s Hospital, Touro and New Orleans East Hospital.

LCMC Health CEO Greg C. Feirn has said the new facility is expected to cost $465 million a year to operate.

The hospital will accept Medicaid and under-insured patients, who now make up about 70 percent of the patients seen at an interim hospital that has served the poor and as a trauma center since Charity was closed.

Cindy Nuesslein, the president and CEO of the new hospital, resigned her position Thursday to begin work elsewhere. Her replacement has not been named.

“It was a herculean effort to recast public health delivery and the success of this effort creates a legacy that will be celebrated for generations to come,” Feirn said in praise of Nuesslein’s work on overseeing construction.