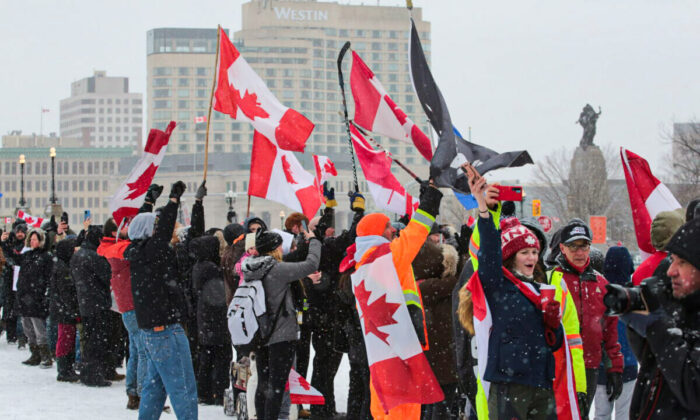 A charity that promotes constitutional rights through litigation says it has successfully defended a Freedom Convoy protester who faced multiple offences, including up to 45 days in jail if convicted.

In a press release on Aug. 15, The Democracy Fund (TDF) said its legal team succeeded in having multiple charges suspended for a client who attended the Freedom Convoy protest in Ottawa in January.

The Freedom Convoy, which began on Jan. 29 and ended on Feb. 20, started out as a demonstration by truck drivers opposing the federal COVID-19 vaccine mandates for cross-border travel but grew exponentially when supporters from across the country joined in to call for an end to various COVID-19 mandates and restrictions.

“The client was peacefully exercising his rights in Ottawa when he was arrested and charged with mischief under $5,000, disobeying a court order, and obstructing a peace officer,” the charity said.

“TDF represented the client during several court appearances, subsequent to which the Crown agreed to stay the charges on August 9, 2022.”

TDF lawyer Adam Blake-Gallipeau said the client had difficulty securing legal representation for his case prior to the charity’s involvement.

“TDF recognized that he had a strong case,” said Blake-Gallipeau in a statement. “As with all our clients, we compelled the Crown to meet its onus.”

According to the press release, the client—whose family had experienced political repression in a former Soviet-bloc country prior to moving to Canada—said he was relieved.

Meanwhile, Public Order Emergency Commission Chief Paul Rouleau has announced that a public hearing into the federal response to the Freedom Convoy will start on Sept. 19 and is expected to run until Oct. 28.

“One of the Commission’s primary responsibilities is to hold the Government of Canada to account for its decision to declare a public order emergency under the Emergencies Act,” said Rouleau in a statement on Aug. 15.

The Public Order Emergency Commission was established by the Governor in Council on April 25, to conduct an independent public inquiry as required by the Emergencies Act following the invocation of the public order emergency by Prime Minister Justin Trudeau on Feb. 14.

“The public hearings are vitally important in gathering the evidence that the Commission requires in order to develop its findings and recommendations,” Rouleau said.

“I intend to conduct the hearings in as open and transparent a manner as possible to help Canadians gain a better understanding of the events of February 2022 and their impact across the country.”