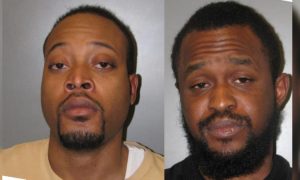 Charges have been dropped against two people accused of punching a man for wearing a “Make America Great Again” hat in a Portland bar.

A grand jury decided on Sept. 5 not to indict Adebisi Okuneye, 23, and Leopold Hauser, 22, who had been arrested and charged with assault following an altercation at Growler’s Taproom last month, according to KGW.

Officers had arrived at the bar in the early hours of Aug. 24 to find a patron, Luke Lenzner, 34, bleeding from his nose.

He told police that two people, later identified as Okuneye and Hauser, had punched him in the face because he was wearing a MAGA hat.

A photograph posted to Facebook by Lenzner at the time shows him with a bloodied nose, the red cap still perched on his head.

Lenzner claimed he had pushed Okuneye away to create space after she “got in his face” according to court documents, reported KATU.

However, Okuneye and Hauser said Lenzner had instigated the dust-up, and that Hauser had stepped in to break things up.

According to the court documents, Hauser said that when he stepped in, Lenzner took a fighting stance. Asked how Lenzner got a bloodied nose, he told law officers, “I don’t know. Arms were flying everywhere.”

After the two were arrested, a video surfaced of Lenzner clashing with customers at another bar hours before the assault, appearing to goad patrons with his hat.

Lenzner is seen shouting expletives and pointing at people, and saying “I served for you” in an apparent reference to being a military veteran, which he later admitted was not true, according to The Oregonian.

Lenzner’s wife told authorities she had encouraged her husband to wear the MAGA had because she was curious about how people in Portland, notorious for its anti-Trump demonstrations, would react.

Hauser told police that he and his friends at the bar had taken offense to Lenzner’s hat and given him a dirty look, which he dubbed “mean mugging.”

Okuneye said that Lenzner’s response, which sparked the altercation, was to say, “[Expletive], how do you like my hat?”

Lenzner on Thursday blamed what he called Portland’s “radical” political bent for the charges being dropped.

“I know who hit me, who assaulted me,” he told The Oregonian. “In any other city they would have been indicted.”

Lenzner said he stopped wearing the cap in Portland bars but still wears it around his neighborhood.

“It’s just one more reason to move out of this state,” he told the newspaper.