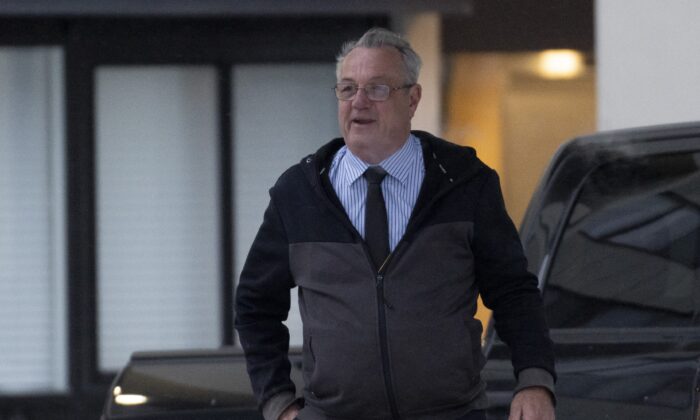 Ontario MPP Randy Hillier is seen as he arrives outside the Ottawa Police Services headquarters in Ottawa on March 28, 2022. (Adrian Wyld/The Canadian Press)
By Andrew Chen

A court has stayed a charge laid against former Ontario MPP Randy Hillier related to a May 2021 protest he was involved in, according to the Justice Centre for Constitutional Freedoms (JCCF).

The JCCF said in a statement that the court on Jan. 3 stayed a charge against Hillier for breaching a public health order issued under the Reopening Ontario Act when he allegedly attended a protest in Barrie, Ontario, while he was still an MPP for Lanark-Frontenac-Kingston.

The Ontario government declared a state of emergency in April 2021, placing the entire province under a stay-at-home order for four weeks due to a surge in the number of COVID-19 cases. The order banned public gatherings with very limited exceptions, which the JCCF said had “effectively criminalized public protests.”

In early 2022, the federal COVID-19 vaccine mandates and restrictions spurred nationwide protests, dubbed the Freedom Convoy, in which truck drivers and other protesters gathered in the national capital in Ottawa in extended demonstrations. Similar protests were also organized across the country in solidarity.

On March 28, 2022, Hillier told reporters that the police had called him a day earlier to turn himself in for his participation in the Freedom Convoy protests. He was subsequently charged with nine offences, including two counts each of obstructing a public officer, counselling mischief, and mischief/obstructing property over $5,000. He is also charged with obstructing a person aiding a peace officer, assaulting a peace or public officer, and counselling an uncommitted indictable offence.

Hillier was released on bail on several conditions, including being banned from posting on social media about the Freedom Convoy protests, COVID-19 mask or vaccine mandates, or the “anti-vaccine cause.”

The charges levied against the former independent MPP had carried potential fines of $100,000 as well as up to one year in prison, said the JCCF.

Christopher Fleury, who serves as Hillier’s legal counsel, said in the statement that his client is pleased with the court’s decision and will continue to “aggressively fight the similar charges that he is facing across the Province.”

Hillier has brought an application in the Ontario Superior Court, seeking to have various public health orders issued under the Reopening Ontario Act declared as contrary to the charter, according to the JCCF. The Court is scheduled to hear oral submissions in that case from July 27 to July 28, 2023.

Hillier previously faced other charges for his participation in a June 2021 rally that was also alleged to be against the public health orders under the Reopening Ontario Act. The charges were dropped in September 2022. The crown prosecutor agreed that it wasn’t in the public interest to proceed with the case as the government had lifted those restrictions, JCCF lawyer Henna Parmar told The Epoch Times in an email at the time.