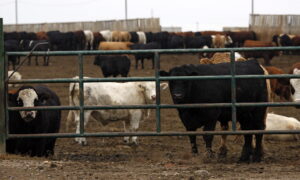 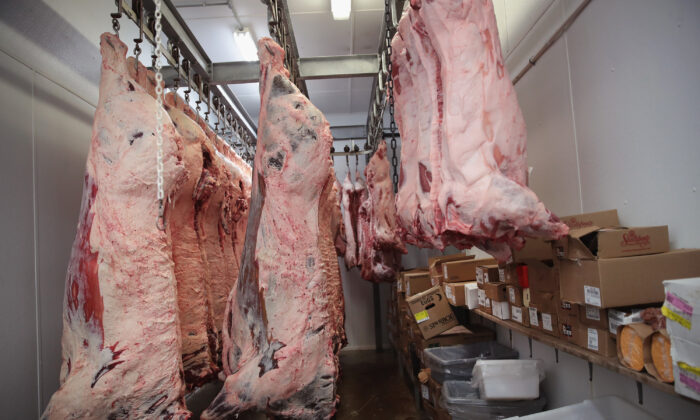 Beef and hog sides hang in the cooler awaiting processing in Elma, Iowa, on July 25, 2018. (Scott Olson/Getty Images)
US News

Matt Johnson, an activist with the group Direct Action Everywhere, had been scheduled to stand trial in Grundy County, Iowa, on Monday on two counts of trespassing at Iowa Select Farms properties in May.

County prosecutors moved to dismiss the charges Thursday at the request of Iowa Select, whose personnel had been subpoenaed but said they didn’t wish to testify, court documents show.

“We cannot be distracted by individuals who choose to break the law and grandstand,” Iowa Select spokeswoman Jen Sorenson said Friday.

Johnson was planning a necessity defense, arguing that his actions were lawful because they were the only way to expose the inhumane treatment of animals. He was hoping to draw more attention to the company’s use of a method known as ventilation shutdown to cut the size of its herd in May.

Johnson had acknowledged, however, that his defense was likely to fail and that he could face fines or jail time if convicted.

Iowa Select’s animals are raised and sent to be slaughtered by Tyson Foods and other meatpackers, and they end up in grocery stores as bacon and pork under several brand names.

Last spring, some producers said they had no choice but to euthanize hogs after coronavirus outbreaks at meatpacking plants led to closures and production slowdowns. They said they had no markets to sell them and ran out of space to house them.

One of the methods they used to trim herds was ventilation shutdown, which involves stopping airflow inside a facility to raise the temperature high enough to kill animals inside.

American Veterinary Medical Association guidelines say the method should be a last resort after others are ruled out, that it should be done quickly enough to kill 95 percent of the animals within an hour, and that all must be eventually killed.

Acting on a tip from a whistleblower, a team of activists that included Johnson placed equipment inside an Iowa Select barn and recorded audio of pigs shrieking, some for hours, as the temperature rose and killed many of them.

They also captured video showing workers hours later walking through the pile of animals and shooting those showing signs of life with a bolt gun. Then, they used heavy machinery to remove the carcasses.

Johnson said that his investigation has found some of Iowa Select’s own employees dissented from the practice, a claim he wanted to explore at trial.

“This company knows that the public … is horrified to learn what ISF is willing to do in the name of profit,” he said. “They’re desperate to conceal their abhorrent and criminal conduct.”

Johnson said that activists snuck in and placed a wireless home security camera in the barn that they could control remotely as well as an audio recorder that they were able to retrieve the next day.

Johnson, an Iowa native who now lives in Berkeley, California, was charged with trespassing after returning to the farm and confronting Iowa Select chief operations officer Noel Williams about the practice. He faced a second trespassing charge related to an incident days later on a different property.

Iowa Select blasted Johnson and other activists at the time, saying they were trying to exploit the coronavirus crisis to advance their agenda. In June, after The Intercept published some of the material captured by activists, the company announced that it had discontinued the practice as the industry rebounded.

“We are cautiously optimistic that we will never again have to face a difficult decision like we had to face last month,” the company said then.

Johnson said that before the practice was exposed, a whistleblower alleged the company had been planning to kill more hogs through ventilation shutdown.

Johnson still faces more serious charges in Wright County, where he is charged with placing recording equipment inside another Iowa Select barn and taking a piglet that he says he rescued from slaughter. He is charged with electronic eavesdropping and third-degree burglary, which are both felonies, and is awaiting trial.