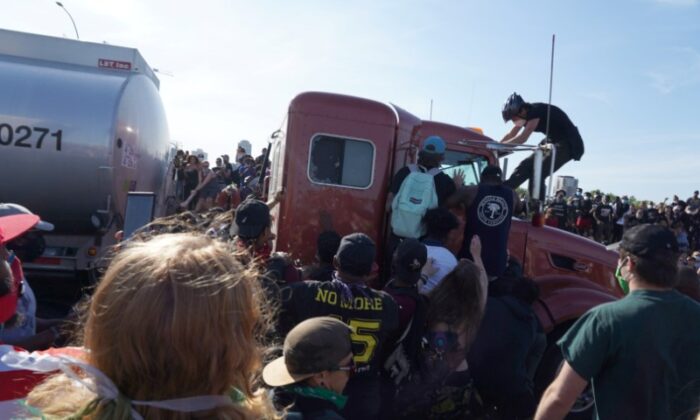 Protesters scale a truck that was driven onto a freeway with thousands of people on it in Minneapolis, Minn., on May 31, 2020. (Go Nakamura/Reuters)
Local News

A truck driver who was seen last year driving towards a crowd of protesters who were blocking a freeway in Minnesota saw his case resolved this week, pending further action.

Bogdan Vechirko, 36, of Otsego was charged last year with making threats of violence with reckless disregard, a felony, and criminal vehicular operation, a misdemeanor.

The charges will be dismissed provided Vechirko meets certain conditions, including paying a yet-to-be determined amount of restitution and participate in so-called sentencing circles, according to court documents obtained by The Epoch Times. Sentencing circles, also known as peacemaking circles, are a component of restorative justice that involve getting the accused together with supporters, a judge, defense lawyers, and others to talk about what happened.

Vechirko must also remain law abiding, not commit any traffic violations related to reckless or careless driving, and have no contact with victims listed in police reports.

Vechirko was captured on video driving a semitruck on I-35 on May 31, 2020. A crowd of protesters on the freeway , who were protesting after the death of George Floyd, parted as he moved towards them. The footage showed the man braked and did not strike any of the protesters.

Officials have said some 5,000 people were on the freeway bridge at the time.

Vechirko was pulled from the cab and later taken to a hospital for injuries after being assaulted by some members of the crowd. No one was charged for assault.

Vechirko was later released without being charged, but prosecutors months later filed the two charges against him.

According to the criminal complaint, Vechirko was “driving directly into the crowd” on the bridge “at a high rate of speed.”

“The truck was observed failing to stop for the crowd until an individual stumbled and fell, compelling the driver, identified as Bogdan Vechirko, the defendant herein, to stop,” it added.

At least one person suffered injuries as a result of attempts to get out of the way of the vehicle. That person reported scraping her leg.

Vechirko admitted in a statement to investigators that he was kind of in a hurry, according to the complaint.

In a statement at the time, the Vechirko’s attorneys said that the man “saw the crowd start to clear and relied on his professional instinct and training to avoid a hard brake that could have jackknifed the truck and could have seriously injured or killed thousands of people, and instead slowed his vehicle while maneuvering through the parted crowd.”

“This scenario could have been incredibly tragic if not for Mr. Vechirko’s actions. It is difficult to comprehend how Mr. Vechirko’s conduct has now resulted in him being charged with a felony,” they said.

Authorities said earlier that they watched the video of the truck heading towards the crowd.

Minnesota Gov. Tim Walz, a Democrat, told reporters on May 31, 2020, that he was grateful that the “vast majority” of the crowd ending up “protecting” the driver, without mentioning those who assaulted the man.

Jon Harrington, the state’s commissioner of public safety, added that there was no information that indicated “this was an intentional act.”

“It wasn’t that he went around the barricades to get to the protest,” he said. “He knew the protest was going on, but it doesn’t appear that he was driving to try and intersect the protest at this point.”