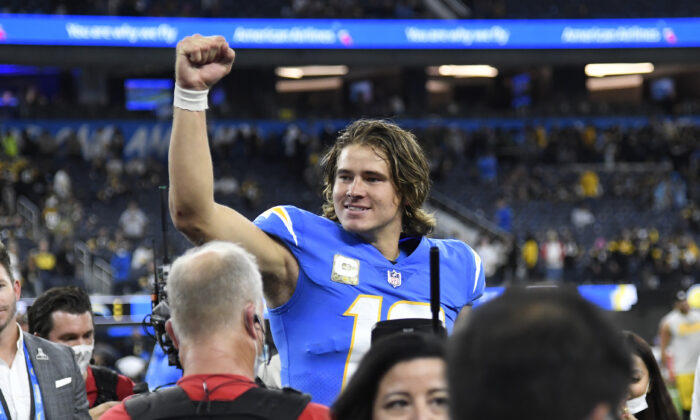 Justin Herbert #10 of the Los Angeles Chargers reacts after a win against the Pittsburgh Steelers at SoFi Stadium in Inglewood, Calif., on Nov. 21, 2021. (Kevork Djansezian/Getty Images)
Sports News

Herbert’s 53-yard touchdown pass to Mike Williams with 2:09 left erased Pittsburgh’s short-lived lead, which came on Chris Boswell’s 45-yard field goal at the 3:29 mark. Herbert completed 30 of 41 passes with an interception and added a team-high 90 rushing yards on nine carries.

Overshadowed by Herbert’s performance was a four-touchdown game by teammate Austin Ekeler, who accounted for 115 yards from scrimmage. He rushed for a pair of scores and caught two touchdown passes.

Ben Roethlisberger, who was activated from the COVID-19 list Saturday after missing a 16–16 tie against Detroit last week, connected on 28 of 44 passes for 273 yards and three touchdowns. He threw 5-yard scoring strikes to tight ends Eric Ebron and Pat Freiermuth in a 26-second span to tie the game at 34 with 4:23 remaining.

Despite scoring 27 points in the fourth quarter, the Steelers still fell to 5–4–1, 1 1/2 games behind first-place Baltimore in the AFC North. The Chargers (6–4) stayed a half-game behind AFC West front-runner Kansas City.

Pittsburgh started the scoring with 8:33 left in the first quarter when Boswell converted a 36-yard field goal, capping a drive that lasted more than 6 1/2 minutes. But Los Angeles took the lead on its next possession when Ekeler zipped 6 yards off left guard for his first touchdown.

The Chargers made it 14–3 with 3:42 remaining in the first half on Herbert’s 10-yard scoring strike to Ekeler, finishing a 98-yard drive after they had made a goal-line stand.

Roethlisberger brought the Steelers within 14–10 at the 1:09 mark when he flipped a 10-yard touchdown pass to Diontae Johnson, but Herbert engineered a last-minute drive that produced Hopkins’ 30-yard field goal with two seconds remaining, giving Los Angeles a seven-point advantage at halftime.

A 17-yard TD strike from Herbert to Ekeler highlighted the third-quarter action for the Chargers before the Steelers scored 10 points early in the fourth quarter to get within 27–20. Ekeler’s 5-yard TD run appeared to restore order, but the Steelers scored 17 quick points (with the help of an interception and a fourth-down stop) to go ahead with 3 ½ minutes to go.