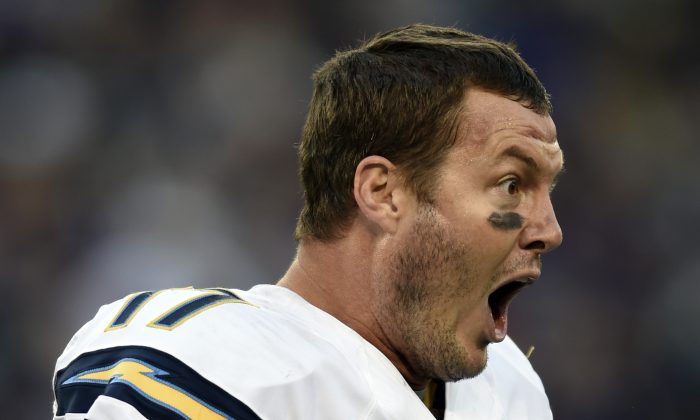 The San Diego Chargers will face the Denver Broncos on Sunday afternoon. Here’s some of the latest updates:

A report on Saturday says that the notion of the Chargers being relocated to Los Angeles is being viewed as “inevitable” among the team’s management.

“There is no way we’re sitting here next year and there’s not a team moving,” an unnamed source told U-T San Diego. The source was described as a person “as much intimate knowledge as anyone about this highly secretive, extremely tense situation.”

The insider added: “I’d be shocked” if Los Angeles doesn’t get a team next year.

The U-T report also says that team owner Dean Spanos has been making a point on “preventing and/or beating those two teams to Los Angeles.”

It also says, “Qualcomm Stadium smells like urine and stale beer in certain of its cramped corridors.

“It lacks many modern amenities, has a scoreboard that takes people back in time and two video boards that would look sensational if they were mounted on someone’s family room wall.”

Dwight Freeney, who was a teammate with Peyton Manning on the Indianapolis Colts for 10 seasons, has never sacked him.

Sunday’s game is probably his last chance to accomplish that.

Last year, he was placed on injured reserve and never got to face the Broncos.

“That’s a big deal. That’s a big, big decision that you’re going to make that’s going to affect so many people, the team, your family, your legacy. I try to leave that decision, no matter how much I go up and down or feel like, ‘Yeah, I do,’ or, ‘No, I don’t.’ At the end of the year, I sit back, and I’ll really think about it.”

Quarterback Philip Rivers said that was the take away from Sunday’s 23-14 loss to the New England Patriots, which snapped a three-game winning streak.

“Hey, we’re still in control, that’s the positive,” Rivers said Wednesday. “But that’s going to change if we don’t get it done on Sunday.”

The Chargers (8-5) enter their home finale as the AFC’s sixth and final playoff seed.

The Chargers know they have to play better. Repeating last game’s offensive showing of one touchdown isn’t a recipe for defeating Peyton Manning and the Broncos.

“This is one of those games where you don’t need a lot of pep talks and to hype it up,” Rivers said. “It’s playoff time for a lot of teams.”