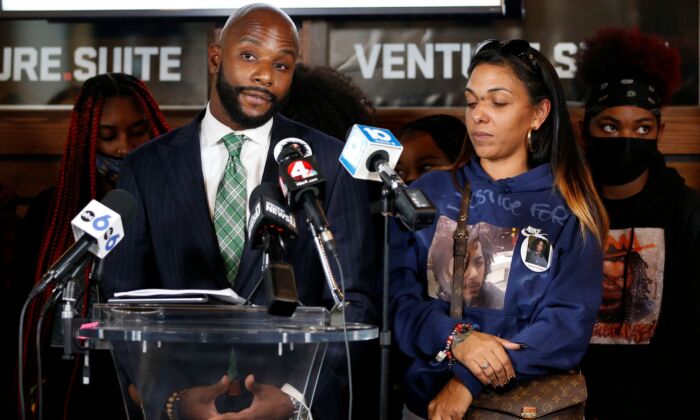 Attorneys for a former Ohio deputy sheriff who was arrested and charged with murder are trying to get his case moved to federal court, where he could have the case dismissed under an immunity clause that applies only to federal law enforcement officers.

On Dec. 8, Steve Nolder—an attorney for former Franklin County officer Michael Jason Meade—said Supremacy Clause Immunity is a constitutional doctrine that prevents federal officers from being prosecuted for state crimes committed while carrying out their duties.

“It would stop in its tracks the state court prosecution, it could not go further. Period. It’s over,” Nolder told The Epoch Times.

According to the Notice of Removal to federal court, Meade was on assignment with the U.S. Marshal’s Southern Ohio Fugitive Apprehension Strike Team (SOFAST), a federal agency, at the time of the shooting and killing of Casey Goodson.

In it, Nolder argues that Meade’s actions were justified, because the shooting of Goodson was “necessary and proper for him to do in performing his federal duties.”

However, on Dec. 8 special prosecutors assigned to the case filed a motion opposing the transfer of the case to federal court.

They argued Meade’s work with the U.S. Marshall’s office had ended before he shot Goodson, and that he was only authorized to locate and apprehend a known fugitive for the federal agency, which was not Goodson.

“The facts do not, clearly, support a finding that he was even a federal officer at the time of the offense, given that his activities as a SOFAST member had concluded for the day and members of the task force were leaving the field,” the prosecutors said d in their motion.

Meade was indicted last week on two counts of murder, and one count of reckless homicide, for the Dec. 4, 2020, shooting of 23-year-old Goodson.

An autopsy report showed that the former truck driver was shot five times in the back, and once in the buttocks, by Meade, as he was entering his home. He died shortly after being shot.

The shooting set off racially-charged protests—with Goodson, a black man, shot and killed by Meade, a white policeman.

Sean Collins, attorney for the Goodson family, did not return repeated requests for comments on the case.

However, his office did provide The Epoch Times with a copy of a wrongful death lawsuit the family filed against Meade and Franklin County.

The suit did not accuse Meade of targeting Goodson for being black.

It chronicled Meade’s documented history for insubordination, violent tendencies, reckless conduct as an officer, and deliberate excessive use of force.

He was disciplined after a 2018 shooting, and for improperly using a Taser on a suspect, according to the lawsuit.

Attorney Mark Collins, who represented Meade at his arraignment, told The Epoch Times the officer was acting in self defense when he shot Goodson.

According to Collins, Meade fired only after Goodson had pointed a gun at him and ignored repeated commands to put his gun down and show his hands.

“It was a proper use of force based on his training, and experience, and circumstances,” said Collins.

He said Meade was waiting at a stop light, in an unmarked cruiser, when he saw Goodson.

Collins said the officer said he could see Goodson waving around a black handgun, with an extended magazine, and was pointing it toward other cars passing by—as well as Meade, who even ducked at one point.

Court records confirmed that a gun found at the scene was registered to Goodson.

The family gave a very different account of the shooting.

He had stopped at Subway and was carrying a bag of subs for the family at the time he was shot by Meade.

Payne said she and eight other family members, including Goodson’s two younger siblings, were home at the time.

She said they came out into the kitchen after hearing the shots and found Goodson laying face down in a pool of blood in the entryway with his keys still hanging from the door.

“My son was killed in cold blood,” Payne said at a press conference, shortly after Meade’s indictment last week.

There was no body cam footage, or video, of the shooting.

Just three weeks after Goodson’s death, more protests rocked the Columbus, Ohio, community when Adam Coy, a white Columbus police officer, fatally shot 47-year-old Andre “Maurice” Hill, a black man who was inside the garage of a single family home where he was an invited guest.

The shooting was caught on 60 seconds of Coy’s body cam.