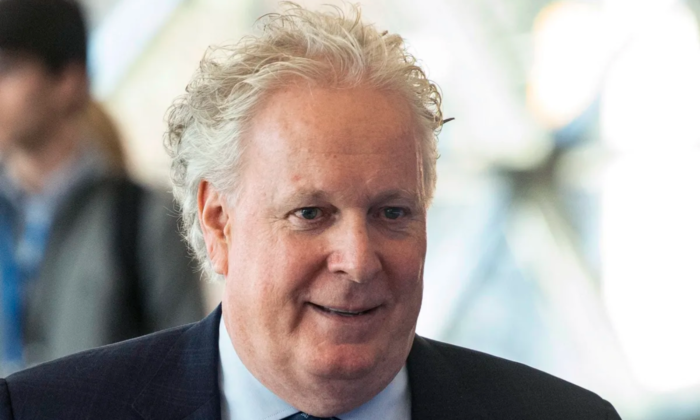 Jean Charest speaks walks through the halls at the Canadian Aerospace Summit in Ottawa on Nov. 13, 2019. (The Canadian Press/Adrian Wyld)
Canada

Charest Waiting on Rules to Decide on Tory Run

OTTAWA—Former Quebec premier Jean Charest says he’s waiting to see party rules before deciding whether he will run to be the next Conservative leader.

Charest met Wednesday night with MPs and senators at a hotel in downtown Ottawa at a reception planned by two people who want him to run.

On his way in he told reporters he’s waiting for the party to release the rules of the race to see how long it will last.

Charest said he wants to make sure it runs long enough for him to be able to properly campaign.

So far Pierre Poilievre, the well-known Conservative MP from the Ottawa area, is the only declared candidate in the race.

As Charest met behind closed doors with MPs and senators, Shannon Stubbs, a Poilievere supporter, tweeted out an image attacking Charest for supporting carbon pricing and the long-gun registry.

“I’m with grassroots Conservative Party members. Our leader must share our values and respect our policies. I’m against the carbon tax, the long-gun registry, and for tax cuts, not tax takes,” she wrote.

Conservative MP and former leadership contender Michael Chong said Wednesday he hasn’t ruled out another potential run for the job.

In 2017, he placed fifth in the crowded race to replace former Conservative leader and prime minister Stephen Harper, in which Andrew Scheer was ultimately elected.

Chong told reporters his first priority now is his foreign affairs critic role, which he holds as Canada and other world powers respond to Russia’s invasion of Ukraine.

The second focus, he said, is “thinking about, in the coming weeks, what I can do to help my party and my country.”

As Conservatives wait to find out their options for party leader, many of their 119 MPs have already thrown their support behind Poilievre.

The contest hasn’t officially begun. A committee of Conservatives struck to establish the rules of the race is to meet again in the coming days. It must decide the criteria for membership sales and entrance fees, not to mention make the all-important decision about how long the competition will last.

Quebec Conservative Sen. Pierre-Hugues Boisvenu said earlier Wednesday he believes the race should run until September to provide candidates from outside caucus a chance to enter, including Charest, as well as political commentator Tasha Kheiriddin, who is considering becoming a candidate.

Others considering running include Brampton Mayor Patrick Brown, who formerly led Ontario’s Progressive Conservatives, and Leslyn Lewis, the Ontario MP who placed third behind former leader Erin O’Toole in the 2020 contest, thanks to considerable backing from social conservatives and members from Western Canada.

One factor that hangs over the race’s timing is the fact that Liberal Prime Minister Justin Trudeau governs in a minority Parliament, which means an election could happen any time.

The lack of official party rules hasn’t stopped different camps of Conservatives from coalescing around prospective candidates and Poilievre from kicking off his fundraising.

He’s also been hitting the road. He attended an event in Montreal earlier in the week and on Friday plans to hold a rally in Regina.

Poilievre has also been staking out his own policy positions. Recently, he released a video in which he called Europe’s response in the lead-up to Russia’s invasion of Ukraine “weak.”

“There’s a reason much of Europe has cowered in this face of this thug — oil and gas,” he said in the roughly six-minute video.

Some of those in caucus backing his leadership defended his wording, while at least one characterized it as divisive.

Chong added the Conservative position is that Canada, alongside Europe, the United Kingdom and United States, have presented a united front to counter Russia’s aggression.

“Our view is also that NATO has been brought together by this threat coming from President (Vladimir) Putin and the Russian federation and it is working more cohesively and more strongly than it has in the past 10 years.”