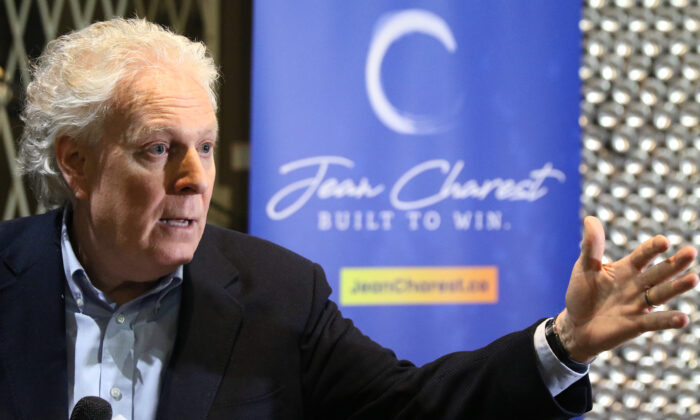 Conservative leadership contender Jean Charest took aim at rival candidate Pierre Poilievre on April 8, saying the MP’s support for the Freedom Convoy “disqualifies” him to be the next prime minister for Canada.

In an interview on CTV Morning Live, Charest accused Poilievre of encouraging “people breaking the laws” due to his support for the truckers who protested in Ottawa for weeks against federal COVID-19 vaccine mandates.

“I have a competitor by the name of Mr. Poilievre who supported, as you know, the blockade, and if you want to be a leader in this country and a legislator, you can’t make laws and break laws,” he said.

The former Quebec Liberal premier also accused Poilievre of sending the wrong message to Canadians in regards to law and order, during a separate interview with CTV News the same day.

“Laws are not a buffet table, if you’re a legislator, from which you choose what you want or not to apply. Because what you’re really saying to people is I’m above the law,” he said.

“You can’t be a leader of a party and the chief legislator of the country, as prime minister, and support people breaking the laws. That disqualifies you.”

Poilievre, who represents the riding of Carleton in Ontario, has frequently spoken in support of the Freedom Convoy. In a tweet on Jan. 29, he commended the truckers he met as being “peaceful, kind and patriotic.”

He responded to Charest’s accusations in the afternoon of April 8, posting a tweet that read: “Jean Charest repeats Liberal lies about truckers.”

The tweet also included a political ad, claiming that Charest is “a Liberal.”

“Jean Charest is a Liberal. As liberal premier, he raised the sales tax by 2 percent. He brought in a carbon tax, and supported the billion dollar long-gun registry. He even said the Liberal party was ‘our party.’ And while the Chinese government detained kidnapped Canadians, Charest was paid a consultant for Huawei on the Meng Wanzhou case, and helping it participate in Canada’s 5G wireless networks,” the ad claimed.

The large convoy of trucks arrived in Ottawa on Jan. 29 to stage a protest against federal COVID-19 vaccine mandates for truckers travelling between Canada and the United States. It turned into a larger movement after many Canadians from across the country began joining in or voicing their support for ending various COVID-19 mandates and restrictions.

Prime Minister Justin Trudeau, who refused to meet with the truckers himself or through representatives, invoked the Emergencies Act on Feb. 14 in response to the protests. The act granted police additional tools to clear away protesters who had parked their trucks in downtown Ottawa for weeks.

At the same time, it gave the state additional powers such as freezing the protesters’ personal and corporate bank accounts without a court order and cancelling the insurance coverage for trucking companies linked to the protests.

Charest said if elected, he would introduce legislation that would make it a criminal offence to block critical infrastructure “across the land and includes border crossings.”

“That includes, whether energy infrastructure or otherwise, that says that if you block and you try to stop our economy from functioning, that the police will have the powers that they need to be able to fix the situation and to reestablish [the] border, and that’s a very clear Conservative value.”

In an interview on Postmedia’s podcast Full Comment with Anthony Furey in February, Poilievre declared his continued support for the truckers, saying the approach taken by the federal government had exacerbated the situation.

“I’m proud of the truckers and I stand with them. They have reached a breaking point after two years of massive government overreach of a prime minister who insults and degrades anyone who disagrees with his heavy-handed approach,” he said.

“Let’s be honest, if Canadians are being inconvenienced, or in any way suffering from these protests, it is because Justin Trudeau made these protests happen and his intransigence is keeping the protests going.”

Asked if the convoy had set precedence for anyone in the future to set up a “blockade” in Ottawa to “get what they want,” Poilievre said the critics were taking aim at the protesters instead of looking at what they were trying to convey.

“Are those people really saying we should keep in place an unscientific and nonsensical mandate just out of spite against protesters?” he asked. “Why don’t we do the right thing, and at the same time put an end to the protests?”

Poilievre said he doesn’t believe in infringing the freedom of one group for the benefit of another group.

“I encourage the truckers to follow the law, behave responsibly, don’t inhibit the freedom of movement of other people,” he said. “But at the same time, the vast majority of truckers and their supporters have been peaceful, law-abiding, joyful, decent, patriotic people, despite the dishonest propaganda of the liberal press gallery on Parliament Hill.”