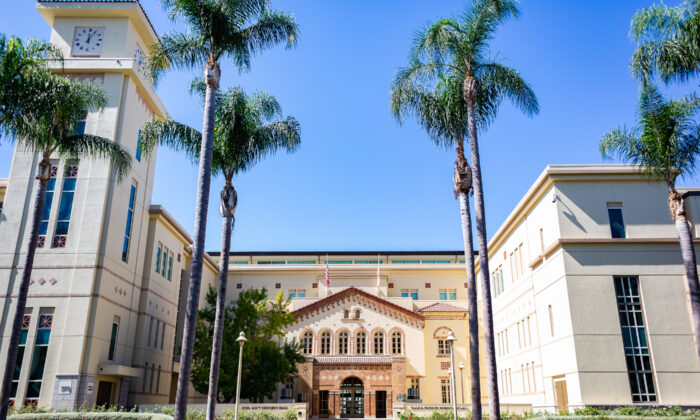 ORANGE, Calif.—A 22-year-old man has been arrested and charged for allegedly assaulting an 18-year-old female student on Chapman University’s campus after the man’s parents recognized their son on the news and turned him into the police.

Dalante Jerome Bell, of Anaheim, is accused of wearing a skeleton mask and attacking the female student outside of her dormitory at Henley Hall at around midnight Sept. 23 while the victim was video chatting with her boyfriend. Campus safety alerts said the victim fell to the ground and was physically assaulted again.

The woman was able to fight back against Bell, who ran away after people came to help her. Bell was said to have been hiding in the bushes prior to the attack.

A number of surveillance cameras caught the attacker fleeing the scene. The incident, prior to Bell being caught, prompted campus police to increase the number of patrols around campus.

In a unique situation, Bell’s parents were watching the news of the attack when the security camera footage showed Bell, whom they recognized as their son.

Bell’s parents called the police, leading to the Orange Police Department arresting him soon after.

“College students should be focused on learning, not worrying about being sexually assaulted by someone lurking in the shadows outside of their dorm,” Orange County District Attorney Todd Spitzer said in a statement.

“This brave woman did what she could to fight back and call for help. Thankfully this individual was quickly arrested and is no longer able to prey on unsuspecting college students. And now the Orange County District Attorney’s Office will do everything it can to ensure this sexual predator is held accountable.”

Bell has since been charged by the Orange County District Attorney’s Office with one felony count of assault with intent to commit a sex offense.

If convicted on all charges, Bell faces a maximum sentence of eight years in state prison. He is currently being held at the Theo Lacy Facility in Orange on a $500,000 bond.