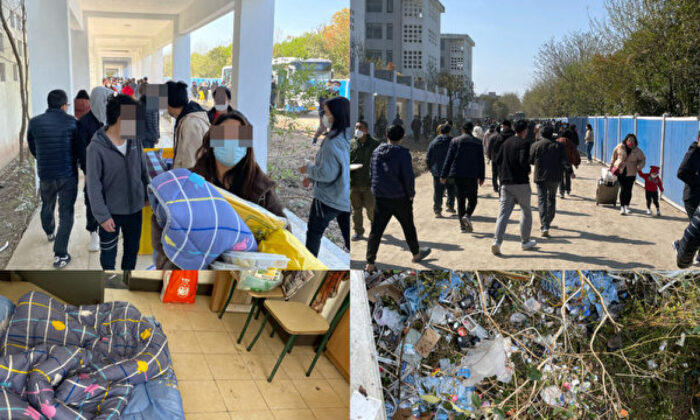 Garbage and chaos captured at Nanhui makeshift hospital in Shanghai, China in April 2022. (Provided to The Epoch Times)
INSIDE CHINA

A frantic scramble for supplies emerged in a Shanghai makeshift hospital as the country’s biggest city cobbles together quarantine centers to house its latest surge of COVID-19 patients.

Shanghai is under an extended, phased, lockdown to curb an Omicron variant outbreak, with a record 13,000 plus new infections reported on April 4. A municipal official claimed the same day that authorities have been renovating public facilities and tens of thousands of more beds will be put into use.

An increasing number of infected patients complained about the lack of food, water, electricity, and medication, at a local quarantine center named Nanhui.

Shanghai citizen Zhimin Liu (pseudonym) was taken to the Nanhui makeshift hospital at 3 a.m. local time on April 3, as he had been in close contact with an infected coworker. “There were more than 4,000 people there when I arrived, and 7,000 to 8,000 by the afternoon,” he told the Chinese-language edition of The Epoch Times on April 5.

“There was no food, no drinking water, and no hot water. If you’re hungry—then you will be hungry.”

Liu witnessed a melee as people pushed and shoved to grab bags containing daily supplies without proper direction or supervision. In the meanwhile, an onsite asthma patient fell to the ground in the chaos, but wasn’t given any attention or aid, Liu said.

His footage, shot in the hospital, quickly came under China’s internet censorship system after being uploaded. Liu received an oral warning that his account would be suspended if he dared to release further information.

Pudong resident Wang Jiandong said on April 5 that Nanhui temporary hospital, which was an abandoned school building, is far from a proper quarantine center for people to live in.

“Without food, drink, medicine, medical workers [allocated to us], we thousands of confined people, are stuffed into it. People robbed for whatever they eat or drink,” he said. “There are both elderly people in their 90s and eight-year-old children inside. People had to sleep on the floor last night as some dorms even have no beds.”

The Epoch Times contacted the Shanghai Center for Disease Control and Prevention and the municipal governor but neither answered the phone.

Some were not as lucky as Liu, as deteriorating infected residents struggled to find a quarantine center to accept them.

“I am now at home, vomiting blood with breathing difficulties,” 58-year-old Zhang (pseudonym) told The Epoch Times on April 4, while confined to her home in Shanghai’s Pudong district.

She tested positive for COVID-19 on March 30 and has since asked for support in any way that she can. “I called 110 and 120 many times, but no one has come to my aid yet,” Zhang said.

The Epoch Times called local authorities repeatedly but no one answered.

A 63-year-old uremic patient surnamed He, tested positive for COVID-19 at Shanghai Changzheng Hospital on April 3. The man has since quarantined himself at home while also suffering from both kidney and heart failure.

“His heart is now uncomfortable, and we cannot find a hospital or an ambulance [to take him],” said a member of his family, adding that heart failure can be dangerous when the elderly patient lives alone.

A total of 62 temporary quarantine sites have been designated in hotels, stadiums, and exhibition centers, said Gu Honghui, Shanghai’s deputy secretary-general, in an April 5 press conference.