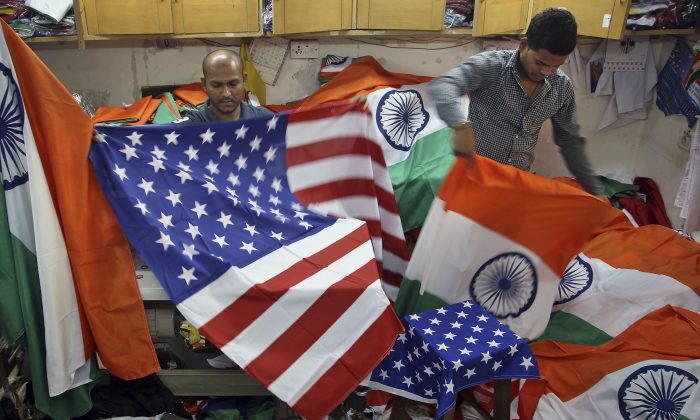 An Indian men fold the U.S. and Indian flags at a shop in Mumbai, India, on Jan. 24, 2015, in this file photo. (Rajanish Kakade/AP Photo)
Viewpoints

President Joe Biden’s chaotic withdrawal from Afghanistan has ruined, perhaps for decades, America’s most important bilateral relationship of this era.

If Washington is going to deter a militant China, it needs the support of democratic India. Unfortunately, India looks like the country most immediately—and perhaps most adversely—affected by the Biden-created debacle. As a result, New Delhi could decide to side not with America but with a Chinese ally, Moscow.

New Delhi was one of the staunchest supporters of the U.S.-backed Afghan government and was working alongside Washington in the war against the Taliban and other insurgents. For instance, Indian intelligence was instrumental in breaking up an Afghan ring of Chinese spies working with the Haqqani Network. The Trump administration believed that the Chinese members of that ring, taken into custody last December, were, among other things, offering cash to kill American troops in-country.

India saw the Afghan government as a friend in blunting extremism in neighboring Pakistan, which has always defined itself as India’s enemy. Islamabad continually foments trouble in India-controlled Kashmir and has continually backed insurgents targeting India. The Lashkar-e-Taiba terrorists who attacked targets in Mumbai in November 2008, for instance, came from Pakistan and relied heavily on Pakistani government resources.

The fall of the Afghan government was, therefore, a blow to New Delhi. Worse, the inability of the Biden administration to orchestrate an orderly withdrawal resulted in compounding the damage to Indian interests.

“The U.S. left behind reinvigorated jihadist networks, tens of billions of dollars in weapons and communications systems, critical strategic infrastructure, and even, reportedly, intel not only on who was working with the U.S. but some who were working with India,” Cleo Paskal of the Foundation for Defense of Democracies told Gatestone. “Physically, the closest target for this massively armed and confident jihadist resurgence is India. As a result of decisions taken in Washington, India is dramatically less secure today than it was a few months ago.”

To obtain security, New Delhi had been looking toward the United States. Consequently, Russia’s and China’s friends in Indian policy circles were losing influence, a trend especially evident after the Chinese incursions in Ladakh beginning in May 2020. Russia’s friends were delegitimized by that event because Moscow had assured New Delhi that the movement of Chinese forces in Tibet, which occurred immediately before the invasion, was only a drill.

As a result of Ladakh and other incidents, the government of Narendra Modi had been working fast to build military ties with the United States. In the wake of the fall of Kabul, however, relationships with Washington have been put on ice. “Indian strategists who have been saying that the way forward is working more closely with the U.S. are being openly taunted by those who have a more pro-Moscow bent,” Paskal, also associated with Chatham House, reports.

“There is a reassessment going on,” she added. “One possible outcome is that Delhi works more closely with Tokyo, and possibly Canberra and Taipei.” Japan, Australia, India, and the United States form what is known as the Quad, which up until the fall of Kabul was coming together as an effective grouping. Now, all bets are off.

Another scenario is that New Delhi decides to work more closely with Russia, reviving decades-old ties. Russia, of course, is increasingly aligned with China.

In the wake of the fall of Afghanistan, Taiwan has become the critical test of American resolve, especially as Biden has justified the withdrawal as a strategic move to counter Russia and China. “The world is changing,” he said to the American people on Aug. 31. “We’re engaged in a serious competition with China. We’re dealing with the challenges on multiple fronts with Russia.”

It is significant, therefore, that on Aug. 27, USS Kidd, a U.S. guided-missile destroyer, and USCG Munro, a Coast Guard cutter, transited the Taiwan Strait. The transits come on the heels of Vice President Kamala Harris’s welcome comments in both Singapore and Hanoi on China’s “bullying” in the South China Sea.

The Biden administration may in fact be willing to defend Taiwan, but that is not all that counts at this crucial time. What also counts are perceptions, and the perceptions that especially count are those in Beijing. Chinese propagandists promoted two narratives as Kabul fell: The United States will not defend Taiwan and an America unable to deal with the Taliban cannot hope to stand up to China.

Those two narratives appear to in fact reflect Chinese thinking, especially because the withdrawal from Afghanistan signaled to Beijing a complete failure of the U.S. intelligence community, the Pentagon, and the White House national security apparatus. Chinese exercises in areas adjacent to Taiwan in August and an Aug. 13 simulated attack on Taiwan with a short-range missile are, in this context, ominous.

The other perceptions that count are those in New Delhi, which had been inching toward closer cooperation with Taiwan. Indian thinkers realized that they needed to challenge China in its peripheral seas as China was challenging India in its nearby waters. India’s close ties with Vietnam are an indication that India perceives its security as dependent on an open South China Sea and even East China Sea. Taiwan, which sits at the intersection of those bodies of water, is essential in keeping sea lanes there open.

America more than ever needs India’s help in ensuring peace in the ring of countries surrounding China and its surrounding waters. Now, however, India could desert America as America has just deserted India. Said Paskal, “To say there is a crisis in trust in current U.S. policymaking in New Delhi is an understatement.”

Gordon G. Chang
Follow
Gordon G. Chang is a distinguished senior fellow at the Gatestone Institute, a member of its Advisory Board, and the author of “The Coming Collapse of China.” Follow Gordon at GordonChang.com and on Twitter @GordonGChang
More articles from this author
‘War Is Real’: Defend Taiwan or Give It the Bomb
sharecomments
Betraying Human Rights for Climate Change
sharecomments
China Cancels Christmas for Americans
sharecomments