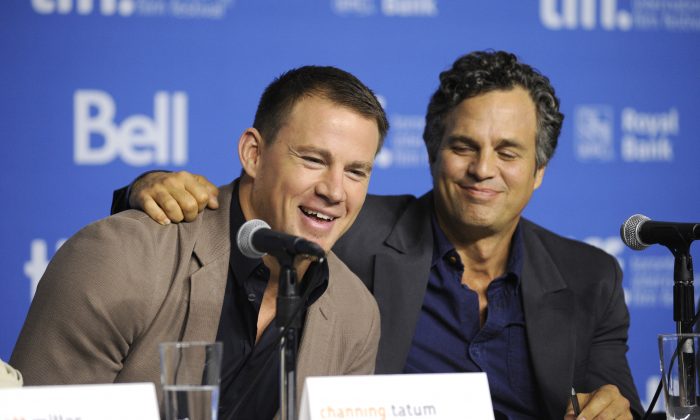 Channing Tatum, left, and Mark Ruffalo attend the press conference for "Foxcatcher" on day 5 of the Toronto International Film Festival at the TIFF Bell Lightbox on Monday, Sept. 8, 2014, in Toronto. (Photo by Chris Pizzello/Invision/AP)
Entertainment

Tatum and Ruffalo play boxers who are brothers, and had to do seven months of wresting during the film.

Directed by Bennett Miller, “Foxcatcher” is the real-life story based on one of America’s wealthiest men, John du Pont, who decided to become a wrestling coach later in his life. Starring Channing Tatum, Mark Ruffalo, Steve Carell, Sienna Miller, and Vanessa Redgrave, the film premiered at the Toronto International Film Festival (TIFF) on Monday, September 8, 2014.

Tatum said that because of the experience of wrestling with Ruffalo for seven months during the shooting of the film, they developed a brother-like relationship.

“I would not have been able to survive this movie without Mark [Ruffalo],” Tatum said comparing the caring nature of Ruffalo to his older sister’s.

Touched, Ruffalo, said he felt the same way about Tatum.

“I lost my brother early… so it was a nice momentary stand-in,” he said.

Even though Carell was also part of the main cast, he was separated from the cast because of his character.

“I would be there [on set] generally three hours before everyone else,” Carell said. “frankly, I was off-putting… that helped remove me,” Carell said.

According to Miller, Channing and Carell didn’t really get to talk to each other until the Cannes Film Festival, when they were promoting the film. But despite so little contact, Tatum learned a lot from Carell’s work ethic.

“I learned that he’s tremendous person and his commitment to what he does is almost unsurpassed,” Tatum said, adding that working with Carell was like taking an acting master class.

“I remember coming out of scene and being just like ‘I don’t know how he’s staying,’ in the maze of what we’re doing and never saying ‘I need a minute to gather my thoughts’ and it was something great for a young actor to see,” Tatum said.