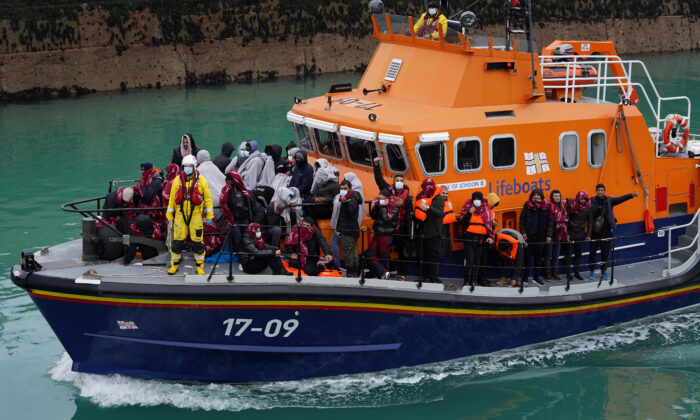 A group of people on board the Dover lifeboat following a small boat incident in the English Channel are brought in to Dover, Kent, England, on Nov. 11, 2021. (Gareth Fuller/PA)
UK

A UK immigration minister said on Wednesday that the drowning of 27 people in the English Channel last week had stiffened his resolve to render the illegal immigration route unviable.

A boat carrying illegal immigrants sank in the Channel on Nov. 4, killing 27 people onboard, including 17 men, seven women, and three children.

Pursglove said he felt there is a profound duty to put the “evil criminal gangs that are responsible for this human misery, that treat individuals as cargo, and are only interested in making a profit” out of business once and for all.

“The thought that women and children and men lost their lives in this way is horrendous,” he said, adding, “For me, that only stiffens my resolve to work as hard as I possibly can to play my part, to render the route unviable with the ultimate objective in my mind of preserving life.”

In the wake of the tragedy, Prime Minister Boris Johnson has increased his lobbying efforts for a returns agreement with the European Union, which Downing Street said is “the single biggest deterrent” to people smugglers and illegal immigrants.

According Downing Street’s account of a video call between Johnson and his Belgian counterpart Alexander De Croo on Tuesday, Johnson “stressed the importance of breaking the business model of people traffickers by establishing a UK–EU returns agreement and using all the modern technology at our disposal.”

A No. 10 spokeswoman added: “The leaders agreed that recent tragic incidents underscore the need to make urgent progress in this area. The prime minister reaffirmed the UK’s desire to work together with Belgium and other European partners to achieve this, and the leaders agreed their respective ministers should meet soon to progress this work.”

Johnson had already urged Paris to take back the illegal immigrants in a letter to President Emmanuel Macon last week, but he angered the Elysee Palace by posting the letter on Twitter. The French government responded by disinviting UK Home Secretary Priti Patel to a meeting of European leaders on the illegal immigration crisis.

But French Interior Minister Gerald Darmanin said on Tuesday that Prime Minister Jean Castex will be writing to Johnson with proposals for a “balanced agreement” between the UK and the EU.