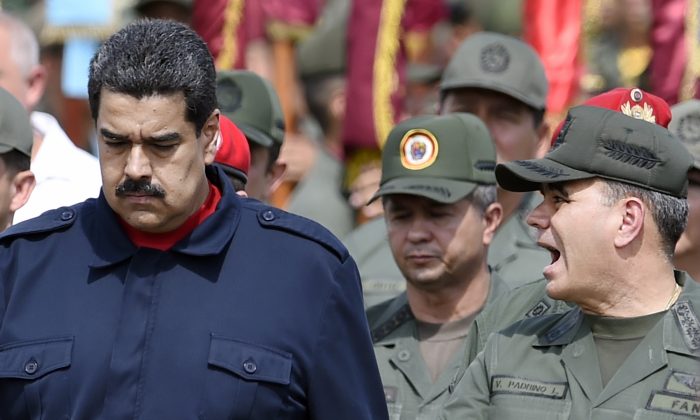 The year closes with a major setback for communism and the leftist São Paulo Forum (FSP) in Latin America.

On Nov. 22 in Argentina, the election of Mauricio Macri as president ended the disastrous Kirchner dynasty, which was part of the FSP. (The FSP is an organization of leftist parties and other groups from Latin America and the Caribbean that aims to establish a socialist-communist bloc in the region.)

On Dec. 6 in Venezuela, the ruling United Socialist Party of Venezuela (PSUV) was defeated by the opposition coalition Democratic Unity Roundtable (MUD) in parliamentary elections. The Venezuelan election was not for the presidency, but it was nonetheless an important blow to the FSP.

The Venezuelan election was not for the presidency, but it was nonetheless an important blow to the leftist São Paulo Forum.

Former Venezuelan President Hugo Chávez (2002–2013) and his successor Nicolás Maduro of PSUV were aligned with the FSP. They led Venezuela’s “revolutionary” politicians, who allowed the leftist Revolutionary Armed Forces of Colombia (FARC) to move freely in the country.

MUD, however, intends to do a big cleanup in the country and restore justice. The power usurped by PSUV’s election-rigging will be put back in the hands of honorable and law-abiding people.

MUD has secured 112 seats in parliament against PSUV’s 55 seats. With a supermajority in parliament, or two-thirds of the seats, MUD’s powers are significant. It will be able to pass an amnesty law for political prisoners, a law Maduro said publicly he wouldn’t grant.

It can elect the comptroller general, the public advocate, and magistrates for the Superior Court. It can promote a vote of no confidence in the vice president and ministers, which would lead to their dismissals. And it can propose referendums (for example, a referendum to remove Maduro from the presidency).

MUD is a broad coalition of center-right parties, social-democrats, conservatives, liberals, and Christians. Since 2008 it has also included socialist parties, such as the “Red Flag,” that don’t agree with Chavéz’s and Maduro’s approach and dictatorial reign. Ultimately, what unites the coalition members is their love for Venezuela and the desire to see it free from the Cuban domain—Chavéz, and Maduro after him, took his cues from the Castro brothers in Cuba.

For years, the opposition denounced electoral fraud. But with all governmental powers hijacked and submitted to the whims of Chávez and Maduro, virtually nothing was done about it.

PSUV apparently tried to tamper with the Dec. 6 elections as well. But this time, MUD decided to change tactics. Instead of denouncing the fraud, it prevented it from happening.

The Cantaclaro project was developed in which 7,000 voters were trained to work in 4,500 polling stations as guarantors of transparency in the electoral process.

Two days before the elections, Venezuela’s Military High Command reported on voter polls. The polls confirmed what everyone already knew: MUD was poised for a resounding victory over the PSUV. Fraud was the only alternative for the ruling party.

On Dec. 6, 70 percent of voters flocked to polling stations, which were set to close at 6 p.m. However, to carry out the fraud, the PSUV-controlled National Electoral Council (CNE) extended the deadline by two hours without any explanation.

As reported by a MUD surveyor, the fraud was set to happen this way: Two hours before closing the polling station, the official in charge would supply the data from people who didn’t show up to vote. They would provide only the ID numbers of those people. With these numbers, new documents were issued to PSUV supporters who would thus usurp the identities of those absent.

In past elections, the CNE (under the influence of the PSUV) insisted on using only electronic electoral processing, because it allowed identity usurpers to leave no track. However, in this recent election, MUD surveyors insisted that printed votes be attached to the voting registry with fingerprints included.

At 6 p.m., the officials and militants allied with the ruling PSUV instructed MUD surveyors to leave. It was obvious they were trying to make sure no one would witness the fraud about to occur. But the MUD surveyors persevered and managed to stay until the voting stations closed.

The government’s strategy didn’t work, on the one hand because MUD’s advantage was blatantly obvious and irreversible, and on the other hand because the guarantors installed signal inhibitors in 1,600 polling stations. These inhibitors prevented communication between PSUV militants carrying out the rigging.

Desperate, PSUV member and Speaker of the National Assembly Diosdado Cabello wanted to activate plan B: He wanted to mobilize the Hugo Chávez Battle Unit and other militant groups to cause riots in the streets.

Cabello is allegedly the head of the drug trafficking organization The Sun’s Cartel. Partly through his influence, the Venezuelan military is aligned with the cartel. Cabello needed the election fraud to guarantee his post as speaker, since the loss of office demotes him to a simple congressman. This will allow the U.S. Department of State to judge him as an ordinary citizen without immunity privileges in an upcoming case against those complicit in drug trafficking. Maduro’s nephews are also involved. The first hearing is expected on Dec. 17.

Cabello’s plan to cause riots was aborted by General Vladimir Padrino López, defense minister and head of the Operational Strategic Command. López said he felt it was his duty to prevent any street demonstrations, to ensure that the constitution would be respected.

It was already dawn on Dec. 7 when the CNE finally announced the overwhelming victory of MUD over PSUV and Maduro made a statement “accepting” defeat.

This won’t fundamentally change the Venezuelan leader. But he announced his acceptance to show that democracy exists in Venezuela. It was also to placate Argentine President Macri, who said one of his first tasks in office would be to expel Venezuela from the MERCOSUR—the Southern Common Market, a regional bloc intended to promote free trade among members—for not respecting democratic clauses.

Maduro may still make use of a law instituted by Chávez, called the “Organic Law of the People’s Power.”

This law calls for an electoral system like in Cuba—the creation of 18,000 communes where Maduro could directly exercise power, and the formation of a parallel assembly, the “People’s Assembly.” This would nullify the constitutional powers of the National Assembly, the state, and municipal governments.

The FSP will do anything to prevent new congress members from exercising their roles, but I hope God will help these brave people and restore democracy in Venezuela.

Graça Salgueiro is a Brazilian psychologist and independent journalist specialized in Latin American politics. Over the years she wrote for various publications, hosted radio programs, and gave lectures on the Latin America leftist movements and strategies. Republished with permission from Mídia Sem Máscara.