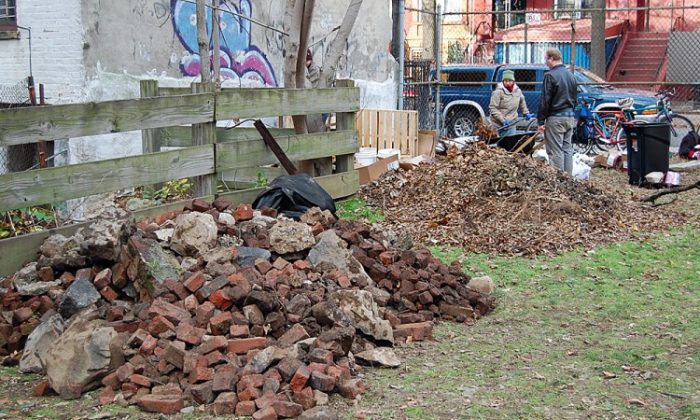 Changing Brooklyn One Acre at a Time

NEW YORK—Shatia Jackson’s family has lived in a brownstone on Halsey Street in the Bedford-Stuyvesant neighborhood of Brooklyn since her great-grandmother Nellie “Fran” Norris moved in during the late 1950s. Every generation of her family since then has been born and raised there.

Since the late 1970s, one of Jackson’s not-so-fond memories includes passing the vacant lot sitting at 462 Halsey Street.

“We have all grown up with that lot being vacant and not thinking that anything can be done or transformed,” she said on Monday.

In August 2011 Jackson strolled past the vacant lot, but this time she noticed a sign posted on the fence with a map and a note asking residents to call if they want to see the lot become something for their community.

“I had walked past a few times and saw the map, but one day I decided to take a picture of it and call the number,” she said.

The number got her in touch with Paula Segal, the lead facilitator of 596 Acres, a public education project created last year. The project raises awareness of the land resources surrounding residents of Brooklyn and helps unite neighbors eager to make changes in their community.

“We try to get people through the process of ‘Wow, there is a vacant lot here and I can do something. How do I start?'” Segal said.

Segal, who had grown tired of a vacant lot near her home in Wallabout Bay, Brooklyn, decided to take action. She used information from MapPLUTO, a New York City Department of City Planning tool, but refined it to suit the needs of the community, not the developers it was made to serve.

In June 2011, Segal went into the community she wished to impact and hung the maps with contact information for 596 Acres at 25 lots in Brooklyn, using her website and social media to get her message out. The hybrid of grassroots and high-tech allows her to reach “the people who access their world by walking around the block and the people who access their world by checking Facebook,” she said.

Last September, Segal facilitated a meeting between Jackson and Kristen Bonardi Rapp, a fellow Bed-Stuy resident who had also inquired about 462 Halsey Street. The pair agreed to partner, aspiring to turn the empty lot into a community garden.

The land was owned by New York City’s Housing Preservation and Development, but Jackson and Rapp went through Green Thumb, a city agency that acts as liaison between government and community garden organizers.

With the help of IOBY, a fundraising organization that connects people and money to site-based projects, Jackson and Rapp raised nearly $1,600. In addition, they received a $1,000 Love Your Block grant from the city.

Last December, the duo began clean up on the lot with other neighborhood volunteers. With help from the unusually warm winter, Jackson was able to work through the winter. The Community Gardens at 462 Halsey will open its gates Sunday, April 1.

Jackson said the once vacant lot is now largely made of community garden beds for her fellow neighbors.

“If you live in the neighborhood, you can come by and pick produce for yourself and it’s free of charge,” she said.

“Bed-Stuy has a large population of low income families and the idea is to try and help supplement the produce that they cannot afford from grocery stores in order to promote healthier eating habits,” she added.

Jackson said for paying members, there is space for private gardening beds as well.

The community garden at 462 Halsey Street is not the only success story from 596 Acres community outreach. Three organizations, Feedback Farms, Small Green Patch, and the Textile Arts Center are utilizing three spaces at 348 Bergen Street. Java Street Garden has begun work on a project at 59 Java Street in Greenpoint, Brooklyn.

Brooklynites can watch their neighborhoods transform from empty lots to community hot spots by viewing the map at 596acres.org.

Jackson’s son Sean Rosado, who helped transform 462 Halsey Street, will be the last generation in almost 30 years to grow up with the unsightly vacant lot on Halsey Street. He will also be the first generation in that time whose memories will include a garden there with fresh vegetables grown just a few blocks from his home.