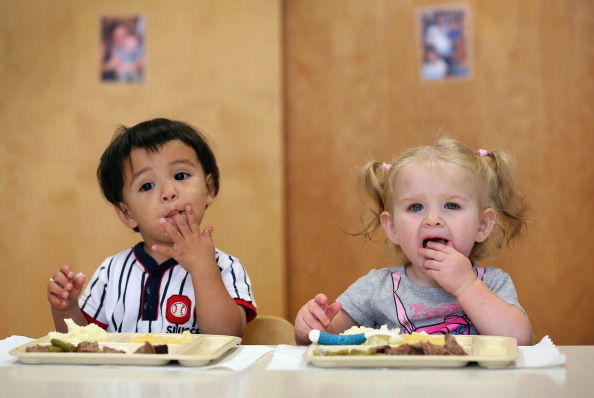 In this file photo, two young children eat at a Head Start center in New York. New changes in the federal program require some Head Start centers to compete in order to keep their grants. (John Moore/Getty Images)
US

Head Start, the federal preschool program created for low-income families, has a major makeover ahead and is at a crossroads. After the spring of 2013, some towns may see different organizations facilitating the government’s early learning program.

Organizations such as school districts, nonprofits, and other childcare providers that have never had the chance to facilitate a Head Start school, now have the chance to receive that baton and compete for the federal funds. The Head Start program is administered by the U.S. Department of Health and Human Services.

The competition for funds is seen as a way to focus on accountability and quality.

“This year was the first time ever that Head Start was funded based on rigorous quality measures,” said Lisa Guernsey, director of the Early Education Initiative with the New America Foundation, a nonpartisan, nonprofit public policy institute based in Washington, D.C.

“Essentially, there are a couple of paths we can go down,” according to Guernsey, “and we hope that we will go down a positive one … by focusing more on these higher standards.”

Guernsey focuses on how to step up high-quality learning environments for young children from birth to 8 years old. She is the author of “Screen Time,” a book about the effects of electronic media on young children.

“[The Head Start program] can have really good outcomes over time,” she said.

The alternative, according to Guernsey, involves fighting over who gets the funding, which would not “be good for the children in the long-run.”

While Guernsey said that a lot of Head Start centers in the nation would not need to compete for future grants, there are some centers that will have to compete for the chance to keep the federal dollars.

In fact, over 100 centers in the nation will have to compete against each other. So far, two of the competing grantees both appear ready and optimistic.

In New York, the NYC Administration for Children’s Services (ACS) must compete for funds “because of administrative deficiencies identified in 2009 that have been corrected, not because of any programmatic deficiencies,” according to a spokesman for ACS.

“ACS has been providing quality services to our city’s children and families for nearly 50 years,” he wrote in an email, “and we believe we are in an excellent position to secure federal funding.”

ACS is waiting for notice whether or not they will receive the federal funds, but they are moving forward in the meantime by taking initiative with their own education reforms. The administration just launched EarlyLearn NYC, which “merges childcare, Head Start, and Universal Pre-K into a single, seamless system, and establishes a foundation for success for the city’s most vulnerable children,” said the ACS spokesman.

On the west coast, the Los Angeles County Office of Education (LACOE), which serves 24,000 students in the federal early education program and has 24 contractors facilitating the program, will have to compete as well.

Keesha Woods, director of the LACOE’s Head Start-State Preschool Division, said that they must compete because of recordkeeping among their contractors.

For example, Woods said that there were claims that they were enrolling children that did not qualify for the free early learning. After 7,000 of their families’ applications were reviewed, the claims were proved untrue, according to Woods.

Woods said that the LACOE welcomes the new regulations.

“We have risen to the challenge,” said Woods, adding that they wrote a dynamic application in competing for the grant.

Many of the same 24 contractors facilitating their program are now competing directly with the LACOE for funds. While Woods said that she supports accountability, school readiness, and transparency, she also feels that a large amount of mandates without extra funding poses a heavy workload on staff.

The hope, she said, is that there will be a lot of support that comes with the higher standards and that professional development will continue with funding from additional sources as well. That, according to Guernsey, would pave the path forward to higher quality.

While most of the regulations are focused on financial issues, management, basic childcare, and facility safety, Guernsey pointed out the concern that Head Start centers will feel pressured to focus solely on the regulations, rather than on developing innovative, high-quality classroom learning.

“We have to watch this over the next couple of years,” said Guernsey, “and make sure that we are still putting the emphasis where it belongs, which is on how children are learning.”