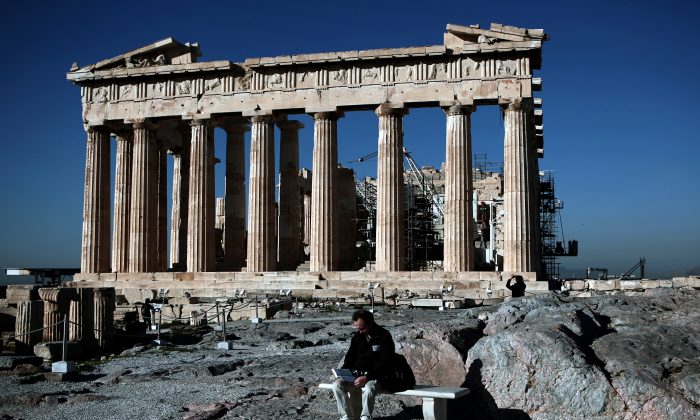 A man reads a book in front of the Parthenon temple on the Acropolis hill in Athens on Feb. 21, 2015. (ANGELOS TZORTZINIS/AFP/Getty Images)
Viewpoints

I recently had the honor of speaking at a U.S. military base, and the topic assigned to me was the importance of tradition.

Upon receiving the invitation, I was a bit puzzled about being asked to defend tradition to an organization more steeped in tradition than just about any collection of people in the United States today. But I soon realized that even the U.S. military is a product of the wider American culture. Trends in that wider culture will, at some point, seep into the military, with new recruits being nurtured in that culture and because members of our military are not barracked away like an ancient army, but are very much part of us.

Only a cursory glance at our culture is necessary to demonstrate immediately the importance of standing with tradition, for everywhere, we are being swept up with change on a scale never experienced in human history; and everywhere, the institution of tradition is being broken up and sold off to accommodate ever more change.

The Pace of Change

Just imagine with me for a moment, the life of the average man—or even a king—in the year AD 819. Then, go 1,000 years into the future and think about life in 1819. How much had really changed in that time? The farmer still worked his field with the same basic tools and his own brawn—or, perhaps with the help of a horse or an ox. The king still ate the same foods prepared over wood fires and lived in the same basic castle, doing the same thing each day. Now, imagine the change that occurred just between 1819 and 1919—the industrial revolution, the steam engine, the automobile, urbanization, factories, and the airplane.

Now, think about how life has changed from 1919 to 2019. We have gone from women’s suffrage to a woman winning the popular vote for U.S. president. We have gone from the Model T to the moon, and soon will have the first recreational space travelers. We went from the invention of computers that were as big as rooms to carrying computers in our pockets that are more powerful than those that launched the space shuttle. We went from the first use of an airplane in war to nuclear weapons that can wipe out cities. Almost no one today works the fields to produce the bulk of their own food, where almost all our ancestors going back thousands of years did.

Though we don’t realize it, we are amid the most chaotic, exciting, and destructive time in human history. Change has never occurred as fast as it has in our lifetimes. Scientific revolutions that once took a century now seem to occur on an almost weekly basis. Cultural, social, and moral revolutions are cracking foundations that have stood for thousands of years.

Since 2000, we have gone from conversations with those around us to a kind of social solitude, with ubiquitous social media devices in our palms and dominating our minds. Earbuds distract us from our environment; news feeds distract us from our companions; binge-watching takes away our sleep. We have thrown off our formal clothes, and we have embraced a new culture of body art that hasn’t been acceptable in the West for millennia. Allowable content on television and in movies has normalized words, images, and situations that were taboo and almost never experienced by those of us who were the children of the 1970s and 1980s.

We inhabit a world where we expect a radically improved iPhone every 18 months and a new preferred method of communication just slightly less often. We are being shaped by a culture in which basic concepts of the moral law have changed as much in a couple of decades as they did in the previous thousand years.

Is it any wonder so many in our culture are confused, lonely, unsatisfied, and desperate? We are living in an age of chaotic change, and we human beings require something more than constant change. If we are to flourish, we also require some degree of order and stability. We require some regularity and knowledge that there are things we can count on.

So many of us struggle to know where we fit in this changing world. We are struggling to know what the rules of propriety are, what is permitted to be said, and what is now off limits. Though most of us don’t know how to articulate it, many of us are struggling to come to terms with how to stay human in this age of technological and cultural disruption.

An Anchor of Tradition

Tradition, though under attack almost everywhere, may be our only means of finding a rudder with which to guide ourselves through these times of change. To bring balance to our lives, we must hold on to traditions that have stood the test of time or restart some anew. We must have places in our lives that aren’t subject to constant disruption and changing fads.

These might be carving out quiet times more in line with the pace at which our ancestors lived their best days, unencumbered by technological distraction. These might be church services and the inherited religious teachings that sustained our forebears. These might be ditching the latest self-help book and picking up a great text that helped build men and women of character for generations. These might be teaching our children about the great men and women of the past who built our civilization, while all around us the snobbery of the current age tears it down.

If we are to regain balanced, ordered, and grounded lives, we must find some places of refuge from constant change. Doing so will require two great virtues that seem sorely lacking today—humility and courage.

We must have the humility to give some benefit of the doubt to inherited traditions, understandings, and ideas. And we must have the courage to stand firm in their defense, when others would rip them down or just toss them aside for the sake of convenience, self-expression, or enhanced entertainment.

Change is inevitable and often healthy. But it’s up to us whether we will manage our own lives through the change swirling around us, or if we will be managed by it.

Gary L. Gregg is the author of numerous books, including “The Sporran,” and is the host of the podcast “Thinking with Plato.”