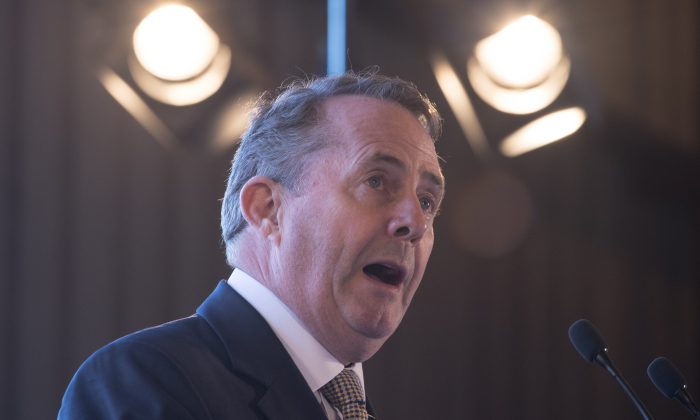 The fate of May’s proposal was supposed to have been settled in a Dec. 11 vote, but it was postponed after it became clear the deal would be rejected.

Fox, who serves as Britain’s international trade secretary, told The Sunday Times that failing to pass the draft Brexit agreement would be “incendiary.” He added that for his lawmaker colleagues—who are expected to vote on May’s proposal in January—supporting the deal is a “matter of honor.”

“What you can be sure of is that is if we vote for the prime minister’s deal, then it’s 100% certain that we will leave on March 29,” Fox told The Times.

Fox claimed that some members of the “Remain” faction have “not come to terms with” the fact that Britons voted to leave the EU.

“It is a sad fact that there are a number of people who rather see Britain fail than see Brexit succeed,” he said. “It is a great pity, almost a tragedy, that they are so un-reconciled to the results of the referendum.”

Fox said that if Brexit doesn’t happen, politicians will have “betrayed” everyone who voted in the referendum.

Since British voters were given the opportunity to weigh in on continued EU membership, “Parliament cannot now, with any honor, renege on that result.

“Were they to do so, I think you would shatter the bond of trust between the electorate and Parliament. And I think that would put us into unprecedented territory with unknowable consequences,” he said.

The trade secretary’s remarks came amid a report by The Guardian that bipartisan efforts are underway in the British parliament to force the government to delay Brexit in order to avoid a no-deal scenario.

One senior lawmaker from May’s Tory party told the newspaper that, “If we are determined to avoid a no deal, and the prime minister’s deal fails, we will have to ask to stop the clock, and that will give time for us to decide to go whatever way we decide thereafter.”

Leaving the EU without a deal would make for an abrupt transition.

Michael Gove, Britain’s environment secretary, is said to be “petrified” of a no-deal Brexit, according to The Telegraph. He is said to believe Britain’s departure from the EU without a deal would be chaotic and hit the country with severe food shortages.

‘Put Aside Our Differences’

May penned an article in the British tabloid the Daily Express before Christmas, calling on the Tories to “put aside our differences” as the “vast majority of people” want politicians to move on from Brexit to other issues. She said it’s time to “dispense with the titles of ‘Leave’ and ‘Remain,’ and instead find common ground and focus on what we can achieve together.”

Christmas is a time “to put aside our differences and focus on what really matters,” she said. “Now, two and a half years after the referendum, it is time for us as a country to do the same.”