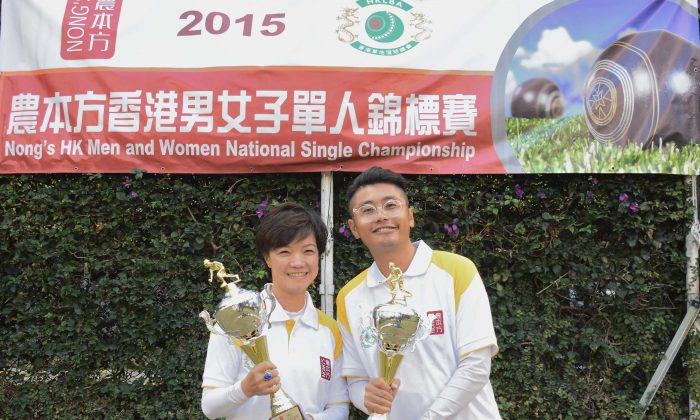 BIG WINNERs –Tammy Tham (left) and Ken Chan from Kowloon Cricket Club congratulate each other after their victory in the final of the National Singles at the Finals Day last Sunday, December 13, 2015. (Stephanie Worth)
HK Lawn Bowls

Chan represented Hong Kong to play in the Singles and Pairs at the Asia Pacific Championships in Christchurch, New Zealand, earlier this month. He was knocked out in the play-off stage of both disciplines and return empty-handed.

Chan, who plays for Kowloon Cricket Club (KCC) and won the trophy in 2012 and 2013, faced his Hong Kong team and ex-Kowloon Bowling Green Club teammate Raymond Ho in the final. Ho was the runner-up last year and in 2006.

The game started evenly and the scoreline was tight until the eighth end when Ho was just a shot behind. But from then on it become Chan’s show as he took 11 shots from the next four ends and opened up a gap of 17:5. Ho tried hard to catch up but could only take one more shot in the remaining ends and the game finished at 21:6.

Chan admitted that he did not play well in the final, “I think both players were not playing to their normal standard. This is probably due to the condition of the green but Raymond’s deterioration was more serious than mine, and that made the difference.”

Ho needed to overcome Neil Harrington of Hong Kong Football Club in the semi-final in the morning but Chan enjoyed a walkover against clubmate Chadwick Chen, who was traveling out of Hong Kong.

Chan also believed that the experience in the Asia Pacific Championships did help him to perform, “Despite not winning anything from the competition, I feel that I am more mature now and have more approaches to play a match.

“Going forward, I will continue my training to further improve my game and achieve results internationally,” said a confident Chan.
.
In the women’s competition, KCC bowler Tammy Tham added the singles title to her collection this year, after winning the National Fours a few months ago.

“I was struggling in the final as my stamina fell dramatically during the course of the game. This was probably due to the tough semi-final in the morning,” said an almost exhausted Tham after the game, “But I stayed focussed and concentrated on my weight control. As Sanlia was not playing well too, so I came out victorious.”

As Tham has applied to play for Singapore at international level, her capture of the National Singles title means that there will be no Hong Kong lady representative at the next World Champion of Champions tournament in 2016.

This Week:
This week in Lawn Bowls (Dec 19): Triples league continues at all greens in Hong Kong starting at 2:30pm.