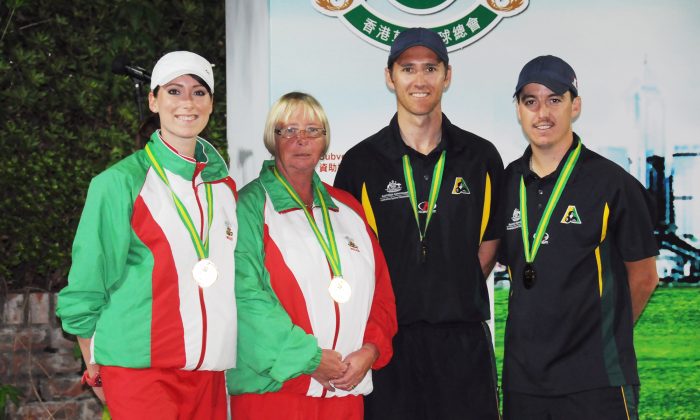 Title defenders ... The winners of last year’s Hong Kong International Bowls Classic, (from left) Kelly Packwood and Judith Wason from Wales and Barrie Lester and Matthew Baus from Australia, will be returning in November. (Stephanie Worth)
International

The champions of the 2012 Hong Kong International Bowls Classic will return to Hong Kong in November to take on the mission of defending their titles, a task no player was able to accomplish since 2001.

“This is difficult as they will face tough competition from other elite bowlers around the world, in additional to our local players, who definitely have a home green advantage,” said Vincent Cheung, President of the Hong Kong Lawn Bowls Association, when announcing the details of this year’s Classic at a press conference last Friday, Oct 4.

Last year, Barrie Lester and Matthew Baus from Australia made Classic history when both men got into the Final of the singles and won the pairs. Lester beat compatriot Baus to lift the singles trophy. In the women’s competition, Sandy Hazell from England won the singles, while Judith Wason and Kelly Packwood from Wales won the pairs.

“For the men’s, the highest ranking will be James Talbot from Ireland, who is No.6 in the world. While in the women’s, we have world No.4 Val Smith from New Zealand.

“Both of them will be hot favourite to challenge for the titles,” said Cheung.

For Hong Kong it will be a balanced combination for both teams. The men’s team will have Li Ming Sum partnering with World Champion of Champion runners-up Stanley Lai. While the ladies will see experienced bowler Angela Chau leading rookie Dorothy Yu, who will make her debut for Hong Kong.

“We would like to use the Classic to breed some of our rising stars. Experience is very important at international level so we are investing on them for our future.”

Another investment will be the continue engagement with Now TV for the broadcast.

“We have tremendous success in the broadcast last year, receiving a lot of positive comments. So we decided to do it again to allow more people to watch our match. This will definitely help to further promote the sport in the territory,” said Cheung.

The singles is a knockout competition that will be played at the Kowloon Bowling Green Club, Club de Recreio and United Services Recreation Club on Nov 9-10, with the finals being held at the Kowloon Bowling Green Club in the afternoon of Nov 10. The 64 competitors include overseas bowlers and Hong Kong’s top bowlers comprising winners of national singles events and qualifiers from local clubs.

The pairs is a seven day competition, where 24 teams of each gender will be divided into two groups to play out a round robin competition. The top team from each group will enter the Semi-finals directly, while the second and third place will meet in a play-off to fight for places in the Semi-finals. The round robin will be played at Kowloon Bowling Green Club, Club de Recreio and Kowloon Cricket Club, while the Final will be played at KBGC on Nov 17.

First organised in 1981, the Hong Kong International Bowls Classic is recognised as one of the best outdoor bowls tournaments in the world. Over the years, famous bowlers from all leading bowling countries have participated in the event. Hong Kong has won the pairs title on five occasions, with the last triumph in 2007. In the singles, Hong Kong players George Souza Jnr and Noel Kennedy won their titles in 1984 and 1994 respectively.