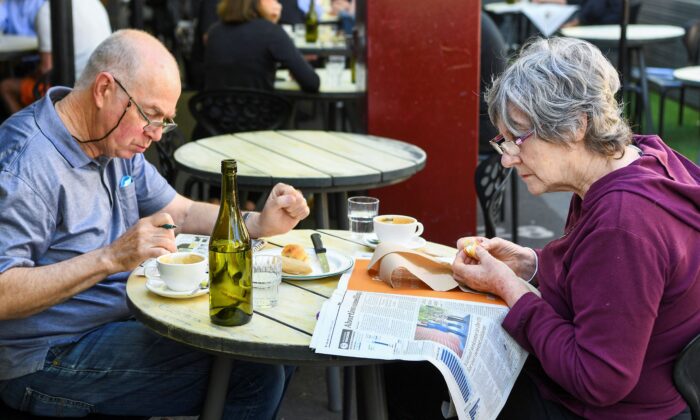 A couple enjoys breakfast at a busy Lygon Street cafe in Melbourne on Oct. 22, 2021. (William West/AFP via Getty Images)
Australia

A new report has found that Australian retirees are significantly affected by the current economic conditions, such as inflation, supply chain disruptions, labour shortages, and other factors making it more expensive for them to maintain their lifestyles.

The retirement standard report by the Association of Superannuation Funds of Australia (ASFA) showed that it costs $66,725 (around US$46,000) a year for a couple and $47,383 for a single retiree between 65 and 84 years old to live comfortably in the June quarter, up two percent and 1.9 percent respectively from the previous quarter.

Compared to a year earlier, the comfortable budget rose by 6.2 percent for a couple and 6.7 percent for a single retiree who had their own home. These figures were slightly higher than the current annual inflation rate of 6.1 percent.

For those having a modest lifestyle, a single retiree had to spend $30,063 a year, while a couple needed $43,250 to maintain their basic needs. This represented increases of 1.4 percent and 1.5 percent, respectively, compared to the previous three months.

The ASFA said the rises were driven by higher prices of non-discretionary items, including food, automotive fuel, and health.

“While there is considerable subsidisation of health costs and benefits being paid from private health insurance, out-of-pocket expenses remain substantial for items such as dental treatment, optical expenses, and gap payments for procedures in hospitals.”

In addition, McCrea said private health insurance premiums climbed by 2.7 percent on average from April 1, with some major insurance companies lifting their prices by over three percent.

The ASFA also found that in the 12 months to June 2022, automotive fuel prices soared by 32.1 percent, vegetables by 14.6 percent, breakfast cereals by 8.8 percent, meals out and take away foods by 4.7 percent, and international holiday travel and accommodation by 19.9 percent.

“Inflation is hitting those staple areas, which is a concern … inflation isn’t great for people on fixed incomes,” McCrea said, as reported by Herald Sun.

Meanwhile, the retirement budgets for those aged 85 and above only increased by 0.8 percent in the June quarter.

The ASFA explained that this was due to older retirees not being affected much by petrol price hikes. Additionally, the budgets did not include any overseas travel for this age group.

At the same time, the peak body calculated that a couple needed $640,000 and a single $545,000 in their super balance when they retired to sustain a comfortable lifestyle, given that they also received a part of the age pension.