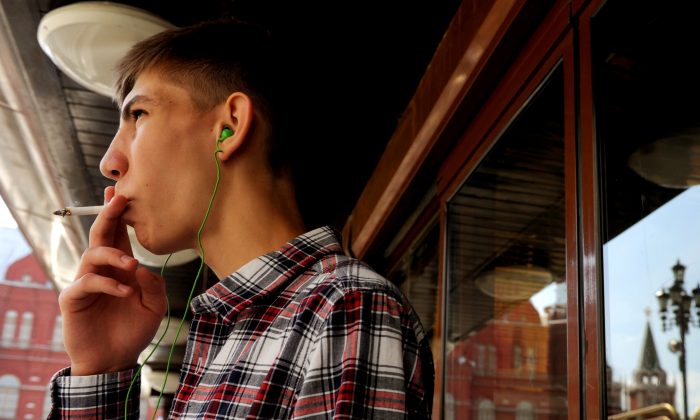 A man smokes at the Manezhnaya Square just outside the Kremlin in Moscow on June 1, 2013. Russia's ambitious smoking ban, which aims to cut the number of smokers in half and improve public health, went into effect today amid doubts that its measures can be fully enforced. (ANDREY SMIRNOV/AFP/Getty Images)
Opinion

Despite being potentially one of the richest countries in the world, Russia still confronts several challenges that hinder the country’s development, such as youth emigration, and demographic and public health issues.

The lack of opportunities and growing economic difficulties entice many young people to emigrate, particularly to Europe and to the United States. Those who emigrate are those who want to broaden their horizons and have better opportunities, and who see them now curtailed by the prevailing climate of corruption in the country.

It is estimated that, between 2008 and 2011, more than 1,250,000 Russians emigrated, an even greater number than those who emigrated after the collapse of the Soviet Union. A survey conducted in 2010, for example, found that 21 percent of Russians want to emigrate, compared with 5 percent who wanted to do so in 1991, the year the Soviet Union collapsed.

During the past two decades, an aging demographic turn and its effect on Russian society has been the focus of debate. There is now universal agreement that unless Russia resolves this problem, its status as a world power will be seriously compromised. Russia has recently experienced a phenomenon similar to that of several developed countries, a rapidly aging population with steadily declining birth rates. However, while people living in most industrialized countries have increased life expectancy, in Russia this phenomenon is marred by the relatively low health status of its population.

These factors, in addition to restrictive immigration policies and low fertility rates, have led Russia to a constant process of depopulation. It is estimated that between 1993 and 2010 the population in Russia was reduced from approximately 149 million to 142 million people. If current trends continue, Russia’s population in 2050 will be 100–107 million, which would be a demographic disaster for such a big country.

Serious health problems among Russians are the result of high rates of smoking and alcohol consumption, as well as high numbers of people living with HIV/AIDS. It is now estimated that more than two million men are HIV positive, and the epidemic doesn’t show any signs of abating. 80 percent of those infected with HIV are under 30, and the epidemic is closely associated with high levels of intravenous drug use.

According to the World Health Organization, heart disease, aggravated by alcohol and tobacco, is responsible for over 1.2 million deaths each year. According to a study, the increase in alcohol consumption since 1987 has caused more than three million deaths nationwide. It is estimated that one in eight deaths can be attributed to alcohol-related diseases.

In Russia, words and symbols are more important than reality. Vladimir Putin, either as President or as Prime Minister, has repeatedly tried to use symbols to rally support for his policies. One of these symbols has been the idea of Russia as an isolated fortress, surrounded by powerful enemies, particularly the United States. However, despite the use of these symbols, there is a great deal of antagonism toward Putin, particularly among young people and intellectuals of all ages. Many people believe that, although there has always been corruption in Russia, it has never been as great as now. This is compounded by Putin’s maneuvers to stay in power indefinitely, an issue that greatly concerns many Russians.

Since taking power again, Putin has exacerbated the negative aspects of his regime: consolidation of power, strict control of the media and the economy, electoral manipulation, censorship and propaganda in the state-controlled media, and persecution of political opponents and of industrialists and merchants who oppose his regime.

At the same time, however, the public seems less willing to endure government abuse, and protests against the current regime are constant, despite the huge fines set by the government for any kind of popular demonstration. And there is no doubt that Putin will face increasing criticism for his ironhanded polices. Given these circumstances, it is impossible to predict with certainty the direction events will take. It is clear, however, that Russian leaders face a wide and complex range of problems. How they respond to these challenges will determine the kind of country that Russia will become.

Dr. Cesar Chelala writes extensively on foreign policy and human rights issues. He is a co-winner of an Overseas Press Club of America award.