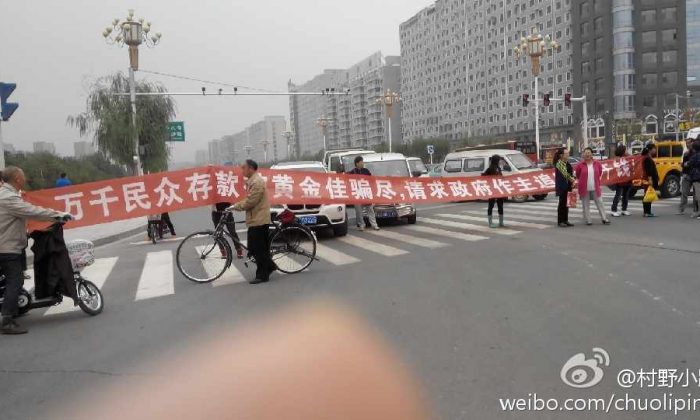 Protesters hold a banner reading “Huang Jin Jia Lied to Thousands. We Demand the Government Get Our Money Back,” stretched across a road in Zhangjiakou City, Hebei Province, on Sept. 22. (Weibo.com)
China

The largest gold investment company in the northern Hebei Province of China was closed down and sealed off by police recently, amidst charges that its chairwoman, Xiao Xu, was engaged in illegal fundraising. Now, thousands of investors are wondering where their money is.

They staged protests in the coastal city of Tianjin on Sept. 22, and six other cities in Hebei.

Huang Jin Jia, the firm, says it invests in gold and gold brokerage services. It promised and for some investors delivered excellent returns, supposedly uncorrelated with the market.

A reporter from Beijing Youth Daily obtained a contract for one of its financial products which claims investors can make returns of 7.5 to nearly 12 percent, depending on the amount invested.

Xiao Xu, the chairwoman, is a member of the Standing Committee of the Langfang People’s Congress, a kind of ersatz legislature. Langfang is a large city in Hebei Province. She last attended one of the official Congress meetings on Aug. 7, reported the Hong Kong Commercial Daily.

There were conflicting reports as to the whereabouts of Xiao, whether missing or in the custody of Langfang police.

“This interest rate is three to four times higher than that of the bank… who wouldn’t be interested?” said Mrs. Hu, another investor victim, who said she hasn’t received her monthly interest payment since the end of August, according to the state-run Beijing Youth Daily.

Complaints came in from nine different provinces, authorities said; the company account with up to 2.5 billion yuan ($407 million) was frozen, according to Sina Finance.

Huang Jin Jia is one of the most well-known gold investment firms in China, dubbed one of the “Ten Most Influential Brands in the Gold Industry in China,” according to Chinese media reports. Chairwoman Xiao Xu had a celebrity status in the industry, appearing on the cover the official “Friends of the People’s Congress” magazine, and elsewhere. She represented herself as an active philanthropist in the Langfang area.

On Sept. 22, thousands of victims from Zhangjiakou City, also in Hebei, protested in front of the local government building, holding banners saying “Huang Jin Jia Lied to Thousands. We Demand the Government Get Our Money Back.”