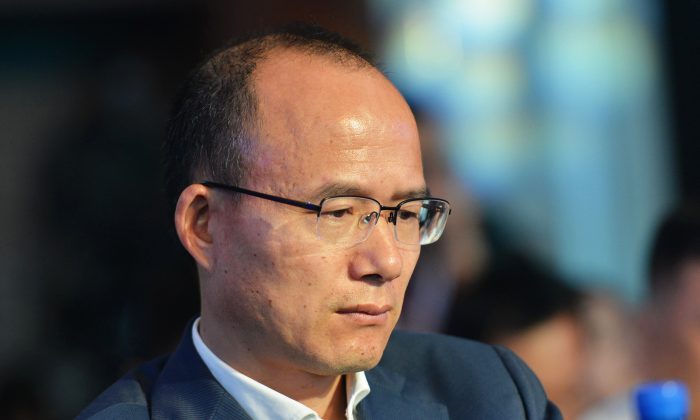 Guo Guangchang, the chairman of Fosun International, one of China's biggest private-sector conglomerates, attends a conference in Hangzhou City, Zhejiang Province in eastern China on June 25, 2015. He recently announced that he would resign from his position at a Fosun subsidiary. (STR/AFP/Getty Images)
China Business & Economy

The chairman of one of China’s largest conglomerates, Fosun International, has recently resigned from his positions at subsidiary companies, sparking rumors that he may have gotten into trouble with Chinese authorities.

After all, doing business in China is often aided by one’s ties to powerful officials.

On Nov. 10, billionaire Guo Guangchang resigned from his chairman of the board position at Shanghai Fosun Hi-tech Company. Earlier in August and Sept., Guo had stepped down from his positions as legal representative and board member of two other Fosun subsidiaries.

The news gave rise to rumors among Chinese netizens that he may be retiring soon, or had been caught in an investigation by Chinese authorities.

On Nov. 13, Guo posted on his social media account that he wished to step down and let the younger generation take charge of the subsidiary companies. He would remain as chairman of the parent company.

The rumors are not completely unfounded; in Dec. 2015, Guo disappeared from public view. Later, the corporation announced that he had been cooperating with authorities on an investigation.

Wang, who was sentenced in 2015 to 18 years imprisonment for embezzlement, was a close friend of former CCP leader Jiang Zemin and his son. Guo is thus rumored to be close with Party officials loyal to Jiang, known as the Jiang faction. Current CCP leader Xi Jinping has taken down many members of the Jiang faction through his anti-corruption campaign.

Guo’s recent resignation may have to do with Xi’s new emphasis on “reconstructing” political-business relationships, according to notable Chinese economist He Qinglian.

“Because Xi believes the relationship in the past was unhealthy, it was a relationship with interests colluding, and implied corruption. After the 19th National Congress, one of the main themes was reconstructing political-business relationships. This is his general direction,” He Qinglian said in an interview.

She further noted that the Chinese regime is targeting big shots like Guo in an attempt to dredge up information on others down the pipeline who may be involved in corruption.

He Qinglian also pointed to the announcement of a new CCP regulatory body in the State Council, called the “Committee on Stable Development of the Finance Industry.” She explained that an earlier iteration of this committee was established several years ago. Under a new name, the committee now has more power to oversee the finance industry, combining what the China Securities, Banking, and Insurance Regulatory Commissions did previously.

In the past, because the three bodies operated separately and did not share information with each other, business tycoons like Wu Xiaohui could engage in corruption and money laundering for CCP officials, said He Qinglian.

Luo Ya and Xue Fei contributed to this report.