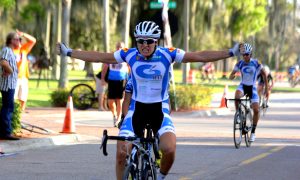 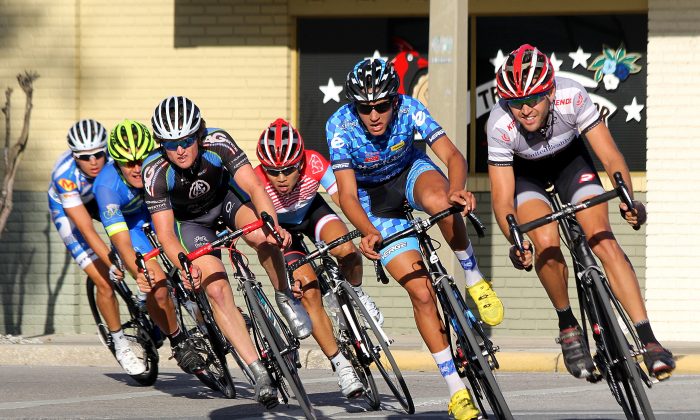 WINTER HAVEN, Fla.—Despite having to overcome some hardships, the Chain of Lakes Cycling Classic was back and in fine form on March 1–2, sending cyclists racing around the roads of Bartow Saturday and around the streets of downtown Winter Haven Sunday.

The two-day, three-event competition, now in its sixth year, is a favorite for cyclists—from nine-year-old beginners to seasoned pros to veterans over sixty years of age; and of course the always- popular Kids’ Race—for offering challenging courses and excellent organization, and this year was probably the best yet.

The weekend started with road-racing for nine classes of riders on a 14-mile course through the orange groves of Bartow and continued with a seven-mile time trial that afternoon.

While there aren’t a lot of steep hills on the route, wind is often a factor, and the final few hundred yards slope up just enough to make riders misjudge their finishing sprints.

Running wide through Turn Five is alright, one rider told another as they scouted the course, but you have to be perfectly positioned entering Turn Six or you will never catch back up to the leaders.

All events are part of the Florida Cycling Bill Bone Pro-Am Race Series, and offer prizes and points towards the USA Cycling national ranking system.

What has always made the Chain of Lakes weekend different from other events on the Florida Cycling calendar is that it is a charity event: the races are run by a group of local enthusiasts who want to help the community, cyclists, and the Polk County Humane Society, which runs the only no-kill animal shelter in the area and which collects all proceeds from the events.

The driving force behind the non-profit Chain of Lakes Cycling Classic, Inc.  was Bill Cundiff, a Winter Haven cyclist who enlisted a handful of friends, who then pitched the city, the cycling clubs and organizations, and local businesses—all of whom were eager to help out.

This year, sadly, Mr. Cundiff had to step down—health issues prevented him from participating. His spot was filled by another Cycling Classics founding member, Dan Rooney, Esq. who learned to do all the jobs Mr. Cundiff had handled, as well as taking care of everything he had already been managing to make the event work.

This was made tougher because the Human Society is in the middle of moving to a new, much larger facility, and couldn’t lend an administrative hand, being too busy with refitting and relocating.

Despite the difficulties, Cycling Classics and its small but dedicated squad of volunteers managed to pull off its typical high-quality event. Hundreds of riders showed up, the races ran smoothly and on schedule, and as after every other event, everyone went home sunburned and satisfied.

The Chain of Lakes Cycling Classic has now established itself as a regular feature on the calendars of Winter Haven as well as Southeastern cyclists. Each year more riders see how professionally the event is managed and more businesses and city officials see the potential for bringing visitors to the downtown area.

The entire weekend, all three events, are free of charge for spectators. Sunday in the park is particularly well-suited for families—the Kids’ Race is open to anyone aged four-to nine who has a bike and a helmet, the setting is gorgeous, and the sight of a few dozen cyclists blasting by five feet away every ninety seconds at more than 30 miles an hour is positively exhilarating—these riders go so fast they create a wind which could snatch your hat off. You don’t have to be a cycling fan to enjoy the spectacle.

A pair of women race past the park from Turn Six to Turn Seven. (Chris Jasurek/Epoch Times)

The Masters 35+4-5 peloton rounds turn one in a solid mass. (Chris Jasurek/Epoch Times)

A pack of riders rounds Turn One. (Chris Jasurek/Epoch Times)

Shawn Gravois tries an attack in the closing laps of the Pro 1-2 race.

For complete results of the three events please visit FloridaCycling.com.