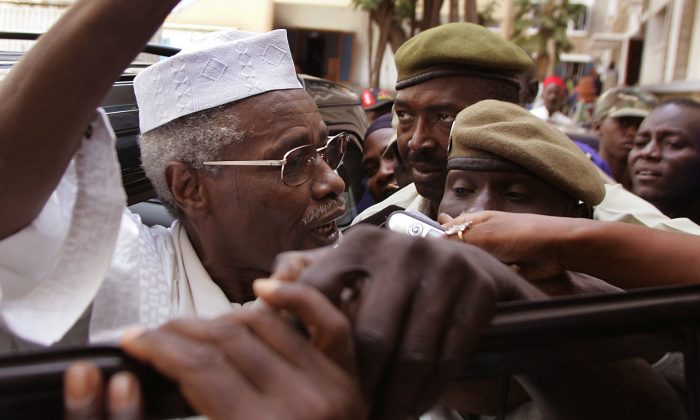 FILE -In this Friday, Nov. 25, 2005, file photo, Former Chad dictator Hissene Habre, left, seen as he leaves the court in Dakar, Senegal. A French lawyer for ex-Chadian dictator Hissene Habre confirms he has been charged with war crimes, crimes against humanity and torture by a special court set up in Senegal to try him. Lawyer Francois Serres told The Associated Press the judges have ordered Habre detained. He has been in police custody since Sunday June 30, 2013, when he was taken away from his villa in Senegal's capital. (AP Photo/Schalk van Zuydam, File)
Africa

Clement Abaifouta, a prisoner himself, had to wrap them in sacks and bury them.

“There was a lot of suffering, a lot of pain,” he said about his time in jail until 1989. “What did I do to have gotten four years in prison? I want to know why.”

Abaifouta wants justice, like thousands of other political prisoners who were victims of torture during Chadian ex-dictator Hissene Habre’s rule from 1982-1990. On Monday Habre will go on trial in Senegal, fulfilling the work of many who say they suffered abuse under his rule and setting a bold precedent for justice in Africa.

For more than a decade after his overthrow Habre lived freely in Senegal. His easy exile was a symbol of impunity in Africa until his he was taken into custody and charged in 2013. Now his trial is a warning to other African dictators that they may be held accountable in Africa for their actions, say human rights experts.

Habre will be tried by the Senegalese courts’ Extraordinary African Chambers. It is the first trial in Africa of a universal jurisdiction case, in which a country’s national courts can prosecute the most serious crimes committed abroad, by a foreigner and against foreign victims, said Human Rights Watch. It is also the first time the courts of one country are prosecuting the former ruler of another for alleged human rights crimes, it said.

“It shows that you can actually achieve justice here in Africa,” said Human Rights Watch counsel Reed Brody who has been working on the case against Habre since 1999.

Habre’s government was responsible for an estimated 40,000 deaths, according to report published in May 1992 by a 10-member Chadian truth commission formed by Chad’s current President Idriss Deby. The commission particularly blamed Habre’s political police force, the Directorate of Documentation and Security, saying it used torture methods including whipping, beating, burning and the extraction of fingernails.

Defense lawyers have dismissed the tribunal as a political tool of Habre’s enemies, emphasizing that the government of Deby, who removed Habre from office, is the court’s largest donor.

Survivors of the abuse, however, have been the main proponents for justice that is now finally in reach, Brody said.

“The most important thing at end of day is the idea that victims with tenacity, perseverance and imagination can overcome obstacles and bring a dictator to justice,” he said.

The court prosecutor says 2,500 victims have registered as civil parties, and 100 will be called to testify during the trial that will last months. Human Rights Watch says 4,000 victims, or victims’ family members, will be registered by next week.

Souleymane Guengueng, a prisoner from 1987-1990 and founder of the victims’ association has been anticipating this trial for 25 years.

Guengueng was an accountant when he was arrested by Habre’s police, who accused him of working with the opposition.

He was stuffed into a tiny prison cell with dozens of others, he said, unable to lie down. Some nights he’d hear screaming of those being tortured and see his friends come back barely alive.

“A lot of my colleagues died at my feet,” he said. “I told myself, if I leave I must find justice and tell the truth.”

In December 1990 the doors were opened to the prison cells in N’Djamena. Barely able to walk or see in the bright light, he and the hundreds of others made their way home.

He soon started writing up stories from others and hid them away, eventually collecting nearly 800 accounts.

In 2001, Brody found the police force’s archives at its headquarters in Chad. The documents listed more than 12,000 victims of Chad’s detention network.

Habre was first indicted by a Senegalese judge in 2000, according to Human Rights Watch, but twists and turns over a decade brought the case to Belgium, and then finally back to Senegal. Under a new president, Senegal’s national assembly adopted a much-anticipated law to create the special tribunal to try Habre.

“It’s been a long path,” said Guengueng. “It’s the impression of victory especially if Hissene Habre sits in front of us, facing us, and us facing him, and he hears the horrors of our times with his own ears.”