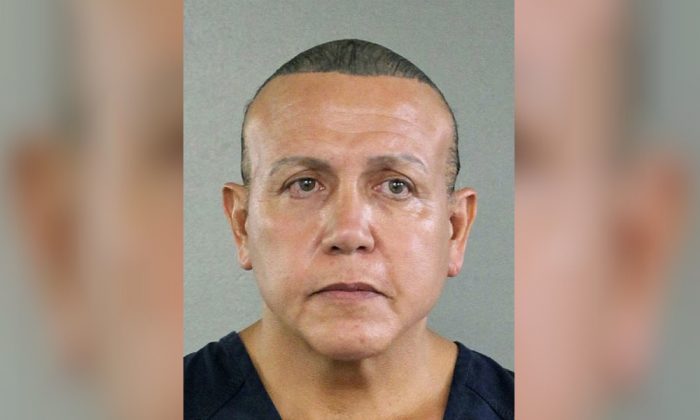 The Florida man who mailed pipe bombs to left-wing lawmakers, thought leaders, and media outlets was sentenced to 20 years in prison on Aug. 5.

Cesar Sayoc was captured in Florida last year and admitted to mailing the packages to former President Barack Obama, former Secretary of State Hillary Clinton, prominent left-wing billionaire financier George Soros, and a number of others in October 2018, in addition to the New York offices of CNN.

Sayoc, 57, wept and crossed himself when U.S. District Judge Jed S. Rakoff announced the sentence in a New York courtroom.

The judge said the bombs Sayoc sent were not meant to explode. Sayoc pleaded guilty earlier this year.

The one-time stripper and pizza delivery man from Aventura, Florida, apologized to his victims.

Shortly before he was sentenced, Sayoc told the judge he was “beyond so very sorry for what I did.”

He blamed a life of mental illness, a childhood sexual assault he suffered at a boarding school, excessive use of steroids, and his failure to listen to his mother, “the love of my life.”

“I was in deep denial. I understand now that I have committed a very serious crime,” Sayoc said. “I wish more than anything I could turn back time and take back what I did,” he added. “With all my heart and soul, I feel the pain and suffering of these victims and I will be apologizing to them for the rest of my life.”

A frantic search for Sayoc was conducted after the 17 bombs were sent to multiple locations in New York, Washington, and Florida between Oct. 22 and Oct. 24, 2018. Several other packages were found in the following days, with the final one found on Nov. 2.

Sayoc was taken into custody on Oct. 26.

“This was a nationwide investigation of enormous scope and of the greatest importance,” FBI Director Christopher Wray said at a press conference after Sayoc was arrested.

Describing the devices Sayoc sent, he said that each consisted of roughly six inches of PVC pipe, a small clock, a battery, some wiring, and what is known as “energetic material,” which is essentially potential explosives and material that gives off heat and energy through a reaction to heat, shock, or friction.

Sayoc was identified through his fingerprint, obtained from one of the envelopes and matched thanks to a prior arrest in Florida.

“This is phenomenal work, with the greatest pressure, under an incredibly tight time frame. We see unbelievable work like this on TV shows and in Hollywood, but to see it up close, in reality, is something to behold, and we’re so proud of our team at the Lab for their work in keeping people safe and helping us to find the individual responsible,” Wray added.

Sayoc posted online about some of his targets in addition to support for President Donald Trump and membership to the Seminole Tribe. The tribe later said Sayoc had never been a member or worked for them.

Sayoc’s past crimes included a 2014 conviction of grand theft and misdemeanor theft and a 2013 conviction for battery.

Following Sayoc’s arrest, Trump said at a rally in North Carolina that he should be prosecuted and punished.

“Political violence must never ever be allowed in America and I will do everything in my power to stop it,” Trump said.

“In recent days we’ve had a broader conversation about the tone and civility of our national dialog,” he continued. “Everyone will benefit if we can end the politics of personal destruction. We must unify as a nation in peace, love, and in harmony.”