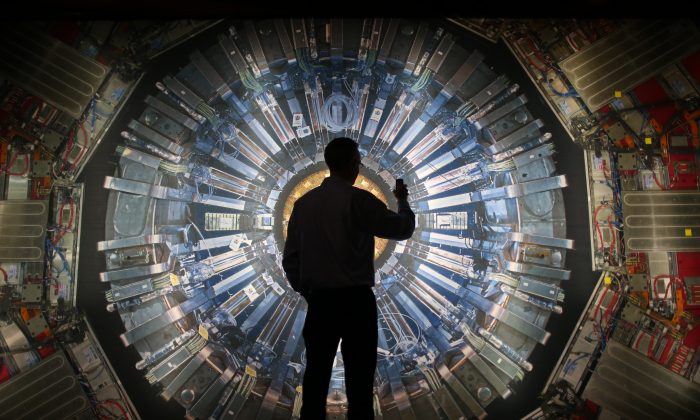 A visitor takes a phone photograph of a large backlit image of the Large Hadron Collider (LHC) at the Science Museum's 'Collider' exhibition in London on Nov. 12, 2013. (Peter Macdiarmid/Getty Images)
Europe

CERN May Shut Down Large Hadron Collider, Other Particle Accelerators Due to European Energy Crisis

CERN, located near the France–Switzerland border, consumes about 200 megawatts of electricity during peak operation. This is nearly a third of the electricity consumption in Geneva, the second most populated city in Switzerland. Speaking to The Wall Street Journal, Serge Claudet, chair of CERN’s energy management panel, said that the organization is drafting a plan to shut down a few of its particle accelerators during periods of peak demand.

CERN has eight particle accelerators in its complex as well as two particle decelerators. Shutting down its accelerators can lower the facility’s energy consumption by up to 25 percent. If necessary, CERN is willing to idle the LHC as well, Claudet stated.

“Our concern is really grid stability, because we do all we can to prevent a blackout in our region,” he told the media outlet. The organization is in talks with French state-owned power company EDF SA, its electricity supplier, about the issue.

Xavier Piechaczyk, head of TSO RTE, the company operating France’s power grid, has warned that the country needs to reduce electricity consumption by 15 percent at peak hours this winter to avoid power cuts.

“We have lost all our margins to meet electricity demand. The potential shortage of gas this winter could make the situation even worse,” Piechaczyk said in an interview with local media, according to Montel news.

French Prime Minister Elisabeth Borne raised the possibility of rotating two-hour power cuts in a recent interview, The Associated Press reported. She blamed the power crisis on the war in Ukraine and the planned shutdown of about half of the country’s nuclear reactors.

“It means that we’re producing less electricity, and there may be moments, if it’s very cold, where we can have a problem to supply electricity,” Borne said. “In such case … we’d cut off, via rotations, neighborhood by neighborhood, for no more than two hours.”

About 67 percent of France’s electricity comes from nuclear power. The country has 56 nuclear reactors, and over half of them are already shut down for repairs and maintenance.

France had closed several of its oil and coal-fired plants to meet green energy targets. Many of the proposed renewable energy projects have been delayed.

Russia has also reduced gas supplies to France. Borne raised the possibility of gas being rationed for large consumers in the business sector.

The power crisis is a novel situation for France, which has long been a top power exporter in Europe. For the first time since 2012, France became a net power importer in 2022 according to data from consultancy firm EnAppSys.