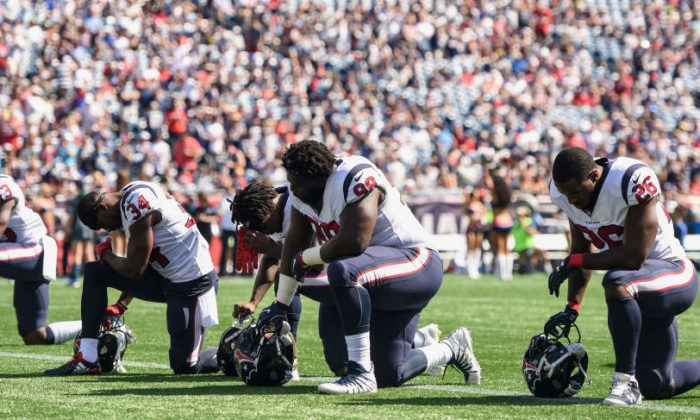 Members of the Houston Texans kneel before a game against the New England Patriots at Gillette Stadium on September 24, 2017 in Foxboro, Massachusetts. (Billie Weiss/Getty Images)
Entertainment News

CEO Says He Won’t Advertise With NFL After Protests

The owner of Hardwick Clothes and CEO of payday lending chain Check Into Cash said that he won’t advertise with the NFL any longer, calling the league “unpatriotic.”

Allan Jones slammed NFL players for taking a knee during the national anthem.

“For the 29 states we operate in, this isn’t much to them, but it’s a lot to us. The Tombras Group is our ad agency in Knoxville and our national media buyer for both TV and radio (for Check Into Cash) and don’t look for Hardwick on the NFL either,” he said.

He called on his media buyer to remove any commercials for Check Into Cash, Buy Here Pay Here USA, or the U.S. Money Stores from airing during NFL games “for the entire season,” he stated.

Over the weekend, President Donald Trump said that players who didn’t stand for the anthem should be fired. In response, at least 200 players protested during the anthem.

Trump on Tuesday tweeted that he spoke to Dallas Cowboys owner Jerry Jones, saying he’s “a winner who knows how to get things done. Players will stand for Country!” Jones, along with Cowboys players, took a knee before the anthem and then stood during the song on “Monday Night Football.”

“Ratings for NFL football are way down except before game starts, when people tune in to see whether or not our country will be disrespected!” the president also wrote. “General John Kelly totally agrees w/ my stance on NFL players and the fact that they should not be disrespecting our FLAG or GREAT COUNTRY!” he said.