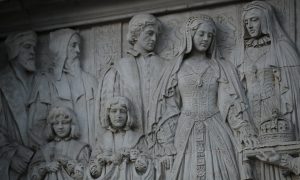 The CEO of Hacienda HealthCare has resigned as an investigation into how a woman in a vegetative state for over a decade became pregnant continues.

According to KPHO, which broke the story, the woman was raped multiple times.

“Timmons’s resignation was accepted unanimously by the Hacienda board of directors,” according to a statement from the company.

Gary Orman, executive vice president of the healthcare’s board, said in the statement that Hacienda “will accept nothing less than a full accounting of this absolutely horrifying situation, an unprecedented case that has devastated everyone involved, from the victim and her family to Hacienda staff at every level of our organization.”

“I want to assure our patients, their loved ones, our community partners, the agencies we do business with, Governor Ducey and the residents of Arizona, we will continue to cooperate with Phoenix Police and the investigating agencies at all levels in every way possible,” said Orman.

“And we will do everything in our power to ensure the safety of every single one of our patients and our employees,” he said.

The statement was sent to news organizations but not posted on Hacienda’s website. There’s no mention of the investigation or how a vegetative woman gave birth on the site.

Timmons is still listed as the CEO on the site as of the morning of Jan. 8. His biography says that “Bill is without a doubt the heart and soul of Hacienda” and says he helped Hacienda expand from 63 clients to more than 2,550 in addition to expanding his workforce from 105 to 750.

A staff member earlier in January told KPHO that none of the staff members were aware that the woman was pregnant until she was giving birth.

“There was a nurse that was there, and from what I’ve heard she’s the one that delivered the baby,” the female source added, noting the baby was healthy.

Because of the possible sexual abuse, the facility has reportedly implemented a policy requiring any male staffers that enter a woman’s room to be accompanied by a female staffer.

“A person in a vegetative state may open their eyes, wake up, and fall asleep at regular intervals and have basic reflexes, such as blinking when they’re startled by a loud noise, or withdrawing their hand when it’s squeezed hard. They’re also able to regulate their heartbeat and breathing without assistance,” the foundation added.

For more details, you can visit this link to the story on our website. #azfamily

The facility was previously cited after multiple staff members walked into the shower room while a male patient was naked, according to government documents.

The citation stemmed from a male patient informing investigators that while he was being bathed by one staff member, other staffers would regularly walk into the area, reported People magazine.

The resident said that it happened “on many occasions” and that it “made him feel uncomfortable.”

One female staff member who bathed the man admitted that another female staffer came into the room. That staffer “just wanted to talk with her,” the employee explained.

The second staff member also admitted to walking into the room but blamed other employees, saying she had seen many other staffers do the same thing.

The staffer and the facility’s director of nursing said staffers usually went into the shower room to get supplies or to use it as a hallway.

A licensing certification specialist from the Arizona Department of Health and Human Services wrote to Brian Henrie, administrator of the facility, on Jan. 25, 2018, regarding a survey that was conducted at the facility on Dec. 13, 2017.

“You have alleged that the deficiencies cited on that survey have been corrected. We are accepting your allegation of compliance and presume that you have achieved substantial compliance,” wrote Belinda Hernandez (pdf).

The facility vowed that the issue was corrected and that staff members would undergo additional training.