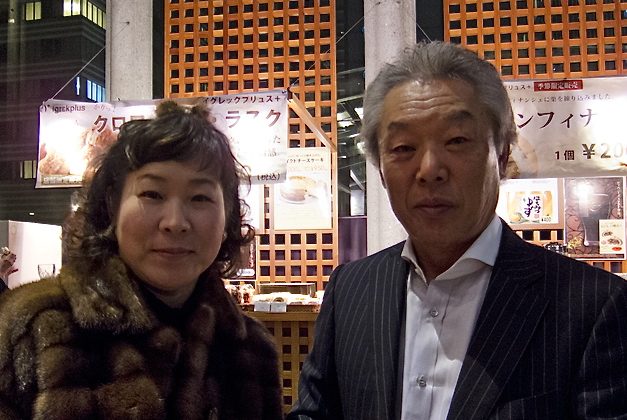 NISHINOMIYA, Japan-The tour of Shen Yun Performing Arts New York Company in Japan came to Nishinomiya, Hyogo, on Feb. 21. The essence of Chinese culture in Shen Yun’s programs was eye-opening for the audience at the Hyogo Performing Arts Center. Mr. Tetsuo Ito, CEO of Ito Kensetsu, and his wife, Suemi Ito, were amazed by the display of authentic Chinese culture. “The show this evening brought us a whole new sensation. It was brilliant and perfect. We will come back next year,” said Mr. Ito.

Mr. Ito shared his thoughts about Shen Yun after the performance. “The stage performance was impeccable and perfect. The color-matching was unique, sharp, and brilliant, which cheered and inspired me. This is my first time watching classical Chinese dance. The artists are highly skillful and their every movement was in absolute order when they danced alone or together. The graceful dances by the female artists show their elegance and femininity; the vigorous dances by the male artists show strength of their masculinity.”

Ms. Ito gasped in admiration after seeing the skills required in classical Chinese dance. “There is a lot of jumping and flipping in the air in the male artists’ dances. They landed steadily without noise, which requires a great sense of balance that cannot be done by ordinary artists. They are highly skillful and professional.”

Classical Chinese dance “entails systematic training in movements and postures, as well as very difficult jumping and tumbling techniques,” making it one of the most comprehensive dance systems in the world, says the Shen Yun website.

Ms. Ito was especially attracted to the digital projection on the backdrop. “I have never seen this kind of art that combines stage performance and a dynamic background. In the pieces An Era Begins and How the Monkey King Came to Be the backdrop projection vividly presented the magnificent and grand scenes of the worlds of gods. It blew my mind seeing the gods and fairies came on to the stage; absolutely creative,” she said.

Display of ‘Good versus Evil’ helps the ‘Fragile human heart’

Nishinomiya City Councilor, Nobuo Ooishi, who was seeing Shen Yun for the second time, said the spiritual connotation represented by Shen Yun showed a commonality between Japan and China. This year’s Shen Yun performance line-up includes a theme of “good versus evil.”

Mr. Ooishi said he has paid much attention to today’s ongoing battle of good and evil in China and the human rights abuses taking place there. He commented on the story-based dance entitled The Choice, which depicts the persecution of the spiritual discipline Falun Gong in present-day China. He said he had learned about the persecution of Falun Gong in China early on and was aware of Falun Gong practitioners’ anti-persecution efforts and to clarify the truth. He said, “I can understand everything they do.”

Mr. Ooishi said that Shen Yun made him firmly believe that “for the fragile human heart, how people regard justice is very important. In conclusion, we have to do something to help today’s China.”

‘Shen Yun is the melody of the divine’

A few young men lingered at the entrance after the show ended.

Liu, a 22-year-old Chinese student who has been studying in Japan for two years, saw Shen Yun with some of his friends. He couldn’t conceal his joy of having had the opportunity to see Shen Yun’s display of China’s 5,000-year-old traditional culture through classical Chinese dance and music. He said, “I was so happy to see this show, which we can’t see in China.”

He thought for a moment and continued: “Having the chance to see these historical stories long forgotten by the Chinese people, I truly hope that all Chinese people can see it, and it will be even better to have Shen Yun perform in China.”

“Every program was very profound. I really hope all Chinese people can have the chance to see our own culture.” He said, “I believe in the retribution for good and evil.”

Liu was asked, as a Chinese person, what was his view of the words “Shen Yun.” He thought for a moment and said, “Shen Yun is the melody of the divine.”

According to the Shen Yun website, Shen Yun literally translates as: The beauty of divine beings dancing.

Shen Yun Performing Arts New York Company has now successfully concluded its tour of Japan where it performed in four cities. The company will continue on its tour of Asia to South Korea.