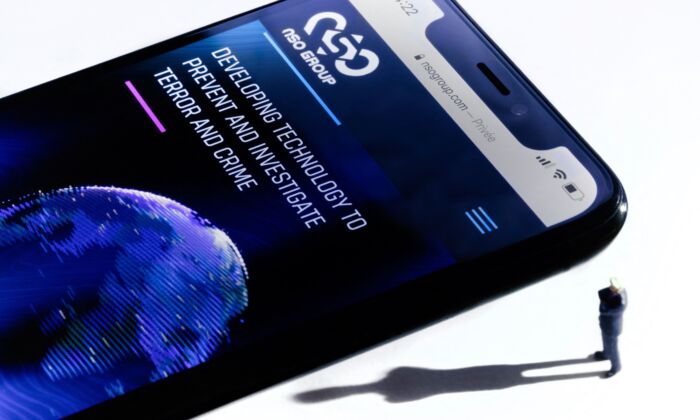 This studio photographic illustration shows a smartphone with the website of Israel's NSO Group which features Pegasus spyware, on display in Paris on July 21, 2021. (Joel Saget/AFP via Getty Images)
World

The chief executive officer of Pegasus spyware creator NSO Group is stepping down, effective immediately, the company confirmed on Sunday, and 100 employees are being let go as part of a reorganization process, according to reports.

CEO Shalev Hulio, one of the founders of the Israeli technology firm, will be handing over operations to chief operating officer Yaron Shohat as part of the reorganization.

“NSO Group announced today the company will reorganize and CEO Shalev Hulio will step down,” a company spokesperson said in a statement to The Guardian, without elaborating on exactly why Hulio is stepping down.

The reorganization “will examine all aspects of its business, including streamlining its operations to ensure NSO remains one of the world’s leading hi-tech cyber intelligence companies, focusing on Nato-member countries,” the spokesperson added.

According to multiple reports, roughly 100 employees, or roughly 13 percent of NSO’s workforce, will also be let go as part of the firm’s reorganization, and Shohat will lead the company until the board appoints a new CEO.

“Today is a sad day in NSO Group. After a difficult period with a lot of obstacles and challenges, the company is forced to part with over a hundred employees,” wrote a company financial planning and analysis team leader on LinkedIn.

NSO Group has faced continuous criticism over its Pegasus software and its alleged spying activities. The company had battled multiple lawsuits following allegations that its tools were misused by governments and other agencies to hack the mobile phones of journalists, dissidents, and human rights activists, without their knowledge.

NSO Group says the software is sold only to “vetted and legitimate” government clients—although it refuses to reveal its client list—and is used by government agencies to target terrorists, pedophiles, and hardened criminals.

Its spyware is known to have been used in Europe, the Middle East, Africa, and Latin America.

However, the Pegasus Project, a collaboration of more than 80 journalists from 17 media organizations in 10 countries, published an investigation in July 2021 that allegedly found that the spyware had been used to target heads of state, activists, and journalists, including Saudi journalist Jamal Khashoggi’s family before and after his murder.

In a statement, the NSO Group denied the Pegasus Project allegations saying that its “technology was not associated in any way with the heinous murder of Jamal Khashoggi.”

Last year, the U.S. Commerce Department blacklisted the company, along with a string of other foreign firms, “based on evidence that these entities developed and supplied spyware to foreign governments that used these tools to maliciously target government officials, journalists, businesspeople, activists, academics, and embassy workers.”

NSO has maintained its narrative that its software is only sold to vetted government clients and has spent “hundreds of thousands” of dollars lobbying to have itself removed from the blacklist since then, according to a ProPublica report.

In April this year, NSO called on the Supreme Court to recognize it as a foreign government agent, which the company says would grant it immunity under U.S. laws restricting lawsuits against foreign countries.

“The company’s products remain in high demand with governments and law enforcement agencies because of its cutting-edge technology and proven ability to assist these customers in fighting crime and terror,” the firm’s temporary successor Shohat said in a statement to Reuters on Sunday. “NSO will ensure that the company’s groundbreaking technologies are used for rightful and worthy purposes.”