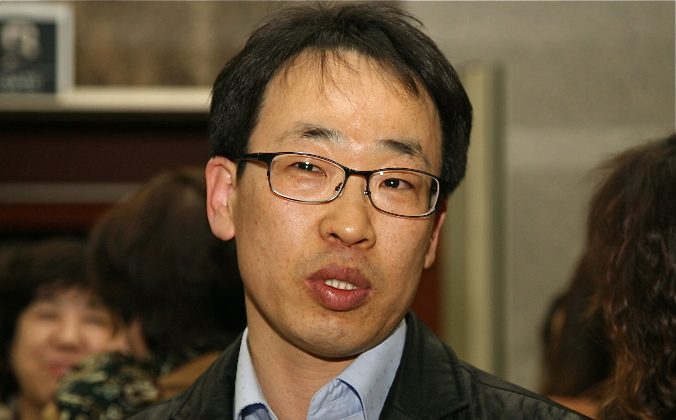 CEO Describes His Experience of Shen Yun: ‘I could feel every single cell in my body resonate’

DAEGU, South Korea—The grand finale of Shen Yun Performing Arts New York Company at Daegu Suseong Aripia concluded on the evening of Feb. 28, after six successful performances in four days. Dong-Jian Lee, CEO of Sunhanbang Co., said with tears of joy: “Such a wonderful performance does not come by easily. … I was so emotionally touched that I could feel every single cell in my body resonate. This is a must-see performance. You must see it at least once.”

Mr. Lee’s company manufactures diapers that are based on traditional Oriental medicinal ingredients, with sales to Europe, Russia and America. In 2007 and 2008, the specially made diaper was winner at the International Childcare Product Exhibition. He mentioned that two years ago his friends had already introduced him to Shen Yun, but he hadn’t had a chance to see it.

Upon walking out of the theater, Mr. Lee said that words could simply not describe how emotional he felt.

“I am so touched. Such a wonderful performance does not come by easily. It was so … emotional. I could feel every single cell in my body resonate. Especially when I saw the program showing the persecution of Falun Dafa practitioners. I felt like I was struck by lightning. I was so emotionally touched.”

Shen Yun includes in its repertoire story-based dances of ancient myths and legends and ones that depict life under China’s authoritarian regime, where freedom of expression and belief is violently suppressed.

Mr. Lee said: “The inner beauty of these Shen Yun performers is simply different. They perform with all their hearts.” He continued to comment that this performance was at its highest level. “These performers are different from others who normally only imitate the movements. Regular Korean dancers could also imitate the movements of these Shen Yun performers, but they would not possess their physical bearing.”

“Classical Chinese dance is grounded in 5,000 years of divinely inspired culture, and is a dance art form built upon a deep foundation of traditional aesthetics,” says Shen Yun’s website. “Classical Chinese dance is rich with expressive power. Through expression of bearing and form, beautiful dance movements bring out the inner meaning of intrinsic thoughts and feelings, reflecting the peculiarities of human nature, the standard for human conduct, moral concepts, mental state, one’s value system, and so on.”

Mr. Lee was also particularly taken by the program Snowflakes Welcoming Spring, saying: “It was amazing that snowflakes could be perform in this way on stage. Very impressive. Very touching.”

Tears returned to his eyes when he spoke about the program Mu Guiying Commands the Troops, saying: “After the general died in the battle, his wife was able to express her excruciating pain on stage. The impersonation was so powerful, so authentic.”

“After seeing this performance, I am very excited and uplifted.

“This is a must-see performance. Everyone needs to see it at least once.” Pointing to his face, Mr. Lee said, “Look at my face. The excitement is still there. The quiver of awe is still right here.”

Deeply touched by the grandeur of the display of classical Chinese dance and music, Mr. Cheng Wantsai, president of a transport company, said, “I never thought there would be such a magnificent show in the world. As it is so wonderful, everyone should see it at least once in their lifetime.”

Due to its popularity, Mr. Cheng came all the way from Busan to Daegu to attend the Shen Yun performance. Mr. Cheng said excitedly, “It was a pity that I had not invited my staff to attend such a wonderful show. If it comes again, I will invite them to see the show together.”

Mr. Cheng further praised Shen Yun saying that the show was exceptionally good and beyond his imagination. He marveled at the state-of-the-art backdrops and the perfect coordination with the dancers’ movements. He was also regretful that he had not brought his wife and daughter to attend the show with him.

“Most Korean people tend to work hard. If they also could see this show, it would be great,” he said.

Mr. Cheng commended the costumes, saying: “The performers’ costumes were really beautiful and colorful. … In addition, the costumes in each program were different and their colors matched very well, so I felt it was very beautiful.”

He said that all the programs were great, especially How the Monkey King Came to Be. “The performance was marvelous, and allowed us to be able to use our imagination. So, I was especially impressed by this program.

In the end, he stressed that he hoped Shen Yun could be performed in Busan in the future, and that he would share the information with his friends and relatives, so that all of them would be able to see it as well.