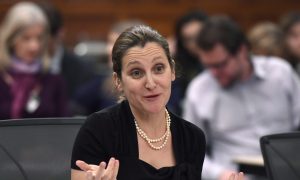 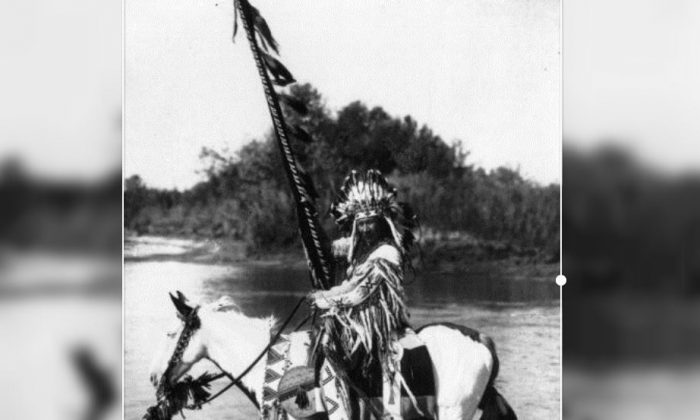 A chief of the Blackfoot tribe on horse-back and wearing traditional dress and headdress, in western Canada. (Spencer Arnold Collection/Hulton Archive/Getty Images)
Canada

CALGARY—A more than century-old Blackfoot headdress that was dropped in a thrift store bin has been returned to a First Nation east of Calgary.

An Alberta government spokeswoman says someone made a call to a poacher tip line last June about a headdress that was up for auction at a store in Okotoks.

A Fish and Wildlife officer determined it was made with golden eagle feathers, but the province says the donor likely didn’t realize its significance.

There was a note with the headdress with the name of someone who had been an administrator in the residential school system between 1890 and 1900.

Wildlife officials consulted with experts at Calgary’s Glenbow Museum, who identified the item as a Blackfoot headdress.

“Over the following months, he will work to restore the headdress to something close to its original condition, so that it can once more fulfil its true purpose and be used in traditional ceremonies,” Alberta Justice spokeswoman Ina Lucila said in an email.

She said it’s not uncommon for wildlife officers to get calls about headdresses, but they’re usually not authentic.

Lucila said the Blackfoot headdress is in good condition for its age and its feathers and beadwork are largely intact.

Joanne Schmidt, acting curator of Indigenous studies at the Glenbow Museum, gets one or two calls a month from people who want to know if they have something of significance to an Indigenous community—and, if so, how to return it.

“I’ve had people contact me about headdresses before, pipe bags—many different items that people sincerely actually want to return to the right community,” she said.