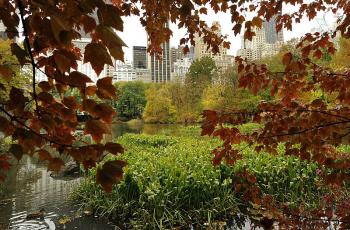 Colorful leaves over the pond in Central Park, New York. (Timothy A. Clary/Getty Images)
US

Central Park: The people behind the beauty

Gidon Belmaker
Gidon Belmaker is a former reporter and social media editor with The Epoch Times.
View profile
Follow
biggersmaller
Print
New York – It is almost impossible to get to know central park in it's entirety. It's 843 acres are a wonderful labyrinth full of twists and turns, leading the unsuspecting visitor to wonderful new spots.

It was not always so, and it takes a lot of effort to keep the park in shape.

The management of central park is done by the Central Park Conservancy in partnership with the city government. The conservancy is responsible for the day to day maintenance of the park as well as for almost 85 percent of Central Park's yearly budget of 25 million Dollars.

In order to manage the park, the conservancy divided into 49 zones, with a Gardner assigned to each zone, responsible to the daily maintenance, explains Regina Alvarez, Director of Horticulture of the Conservancy. Some of the staffers, says Alvarez, know their trees on a personal level.

According to information on the conservancy's website, conservancy crews care for 250 acres of lawns, 26,000 trees, 150 acres of lakes streams and 130 acres of woodlands. The crew are responsible for installing hundreds of thousands of plantings each year, including bulbs, shrubs, flowers and trees.

With regard to infrastructure, the crews maintain 9,000 benches, 26 ballfields and 21 playgrounds, preserve 55 sculptures and monuments, as well as 36 bridges. The are required to remove graffiti within 24 hours. Over 5 million pounds of trash is collected a year from the park.

This kind of clockwork maintenance was not always the case. Just a few decades ago, some of the areas of the park were dangerous to enter, many of the benches were broken. Buildings were abandoned and vandalized and vegetation was overgrowing in some areas. This situation started to change when the conservancy was founded, says Alvarez, adding that the change came one step at a time,and it took a long period of time for all the problems to be addressed

Besides recreation for the residents of New York, The park is also essential for keeping wildlife in the concrete jungle of Manhattan. One of the challenges the planners of the park need to deal with is balancing the needs of nature and the wildlife and the needs of the 35 million people visiting the park every year. “It is not an easy thing to do”. Said Alvarez. The food web in nature, she explains, requires trees to rot, fungi and insects to feed on the rotting trees and birds to use the bark. Those things can be dangerous to the visitors. The conservancy consults and cooperates with teams of scientists to make sure the wildlife in the park, and especially the birds get what they need, without inhibiting the human use of it.

The Conservancy offers some volunteer opportunities for people who want to contribute to the park. Some of the volunteers help with the gardening and landscaping of the park or cleaning it, other volunteer projects include giving a helping hand to visitors.

There are many kinds of volunteers, says Laura Frank, Volunteer director at the conservancy, with Some volunteers have been coming for 25 year.As for the reasons, some of the volunteers feel that central park is their back yard, and want to help, says Frank, others, “Want to give back to a place they love.” volunteering in the park can also be a great way of socializing and staying fit.

“Without Central Park New Yorkers wouldn't fly, the way they do”, commented Frank on the importance of the park, Adding that she gets a lot of satisfaction from Seeing the joy on people faces as they enjoy the park. “ I couldn't live n New York without central park,” Frank quoted a response she often gets when people hear she works for the park.

Historically, most of the volunteers were retirees, and continued to volunteer for a long period of time. In the past few years, due to unemployment, the volunteer demographics became younger and less persistent. The conservancy demands a minimum 48 hour commitment in 3 hours shifts.

“We have more Inquiries [about volunteering] than we can handle,” said Frank.

“It is one of the greatest things that were ever done for New York”, said Alvarez about Central Park. Many times as she is working in the park, she says, people will stop her, thanking the crews for their hard work. “without Central Park, life would be less bearable for people in New York”, she said.