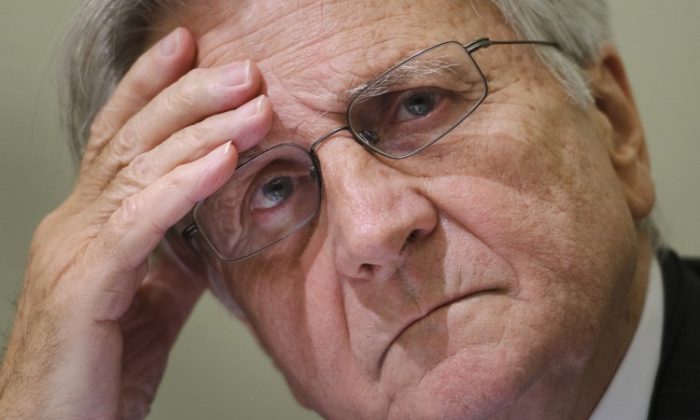 Former European Central Bank chief Jean-Claude Trichet gestures during a press conference in this file photo from last year. Trichet is also a member of the board of directors for the Bank for International Settlements (BIS). BIS was very critical of central banks in its recent report, in an effort to prevent another financial crisis. (FABRICE COFFRINI/AFP/Getty Images)
Business & Economy

The world’s advanced and emerging market economies continue to be stuck in a vicious cycle, which began with the financial meltdown in 2008. Information provided in the recent Bank for International Settlements (BIS) 82nd Annual Report is not just very worrisome, but outright frightening.

“Those hoping for quick fixes to the strains in the global economy will continue to be disappointed. … Five years on from the outbreak of the financial crisis, and the global economy is still unbalanced, seemingly becoming more so as interacting weaknesses continue to amplify each other,” the BIS report announcement said.

The vicious cycle cannot be blamed on one specific group, but on three: governments, the financial sector, and consumers.

A government’s financial stability is at risk due to unbalanced budgets, unsustainable debt, and the loss of stellar credit ratings. The financial sector’s reliance on government handouts, inability to accept losses from excessive risk taking, unwillingness to step into reasonable lending practices, and inability to let go of high profit expectation have become major stumbling blocks toward a recovery. Lastly, consumers and corporations have to downsize their debt and return to reasonable spending habits.

“The global economy has yet to overcome the legacies of the financial crisis to achieve balanced, self-sustaining growth. In different ways, vicious cycles are hindering the transition for both the advanced and emerging market economies,” BIS said in its report.

“The first months of 2011 seemed to offer the beginnings of a self-sustaining recovery, a promise that turned out to be a false dawn. The pattern appears to be repeating itself in 2012,” according to the BIS report.

BIS is of the opinion that although developed countries made some headway in addressing the overall fiscal problems (especially monetary) last year and the beginning of this year, they hit the same snag head-on during both years, and then the downward spiral started anew.

“Overall, the economic momentum in advanced economies was too weak to generate a robust, self-sustaining recovery,” according to the BIS report.

BIS concluded that in certain developed nations, which were not named but most likely include the United States, weaknesses lingered and stalled a sustained recovery.

“The drag on private consumption persisted. Unemployment remained high, or even increased further. Falling property prices and high levels of debt continued to weigh on household balance sheets,” the BIS report said. All such concerns are considered major impediments toward a recovery.

“The global recovery started to falter in the second quarter of the year [2011]. At that time, indicators of business activity weakened significantly in the United States, followed by those for EMEs [Emerging Market Economies]; and in the second half of 2011, they deteriorated relatively sharply in Europe,” the BIS report said.

Commodity prices, already high, have not come down to acceptable levels since 2011, given the consumption increase in emerging markets, reduced agricultural output due to bad weather, and higher oil prices due to political upheaval in certain regions, dampening the recovery of developed market economies.

With high unemployment in the United States and other developed markets, disposable income dropped significantly, and the purchasing power needed for a sustained improvement of the economy did not materialize.

In response to external factors, central banks in a number of developed markets increased the money supply through a method called quantitative easing, which involves reducing the interest rate to or close to zero and purchasing government or corporate bonds from financial institutions.

BIS suggests that the abovementioned methods, used during times of slow growth and high unemployment, may be a kickback reaction. “However, there is a growing risk of overburdening monetary policy. By itself, easy monetary policy cannot solve underlying solvency or deeper structural problems. It can buy time,” the BIS report said.

“The crisis led to a significant further deterioration in fiscal sustainability by increasing fiscal deficits and debt. As a result, financial markets and credit rating agencies took a more critical view of sovereign credit risk. Government debt and deficits that had been tolerated before the crisis were no longer considered sustainable,” according to the BIS report.

Sovereign credit ratings were downgraded by the major credit agencies over the past year. In August 2011, Standard & Poor’s (S&P) downgraded the United States from AAA (outstanding) to AA+ (excellent). In May, Fitch Ratings cut Japan’s long-term foreign currency rating from AA to A+ with a negative outlook.

A downgrade of sovereign credit makes it more expensive for governments to borrow in the financial markets. Any downgrade suggests that the risk for a financial institution lending funds to the government has increased. Also, the risk of an investor losing out when investing in government bonds is greater.

“A weakening of sovereign creditworthiness adversely affects financial stability, the conduct and credibility of fiscal and monetary policy, the functioning of financial markets and private sector borrowing costs,” the BIS report advised.

It is repeated throughout the BIS report that governments must reduce debt to sustainable levels before the economy can return to good health. It is not a question that governments must bite into the sour apple and take decisive action, but the question remains as to how to address the dilemma and come up with solutions that are workable.

BIS isn’t suggesting that time is running out concerning the return to a healthy economy, but the longer the budget deficit lingers, the longer it will take for economic recovery.

“In most advanced economies, the fiscal budget excluding interest payments would need 20 consecutive years of surpluses exceeding 2% of GDP—starting now—just to bring the debt-to-GDP ratio back to its pre-crisis level,” according to BIS.

Reckoning in the Making

“Why not just get rid of central banks and put monetary policy in the hands of the market? Moving to a system built on sound money would ensure credit is only created where it’s genuinely needed for productive purposes,” an article on the Daily Reckoning website suggests.

The article argues that central banks, as they are authorized to print money, do not have to be transparent and are not under government control.

To make his point, the author suggests, “Thus we have two independent systems—political system, elected by the people—and the economic system headed by the central bank, which is private, where people do not have any control.”