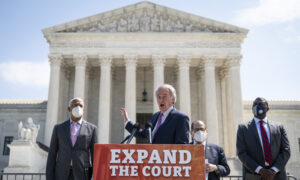 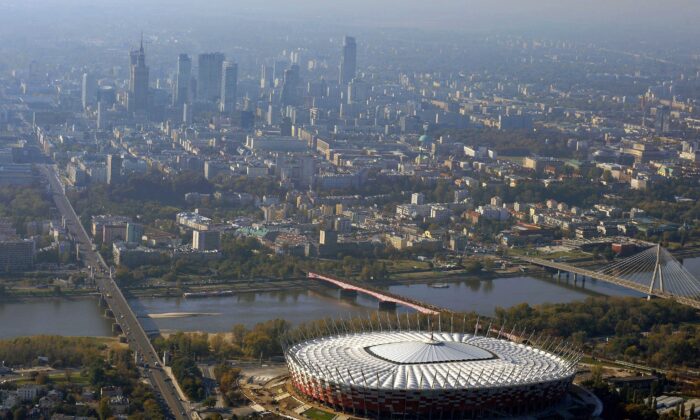 An aerial view of Warsaw, Poland, with the national stadium at the bottom, on Oct. 18, 2011. (Robert Grahn/AFP via Getty Images)
Viewpoints

I’m writing from Warsaw, Poland, making for both my first time venturing behind the old Iron Curtain and my first trip back to Europe since the onset of COVID-19. Despite the overcast weather endemic to this part of the globe, the mood on the ground is unmistakably buoyant. Poland, along with its fellow Visegrad Group member Central European nations of Hungary, Slovakia, and the Czech Republic—and perhaps also including nearby Austria—has emerged as a perhaps-unlikely ground zero in the fight to save Western civilization from a debilitating and increasingly all-encompassing liberal decadence.

The sad history of the region continues to pervade daily life here. Locals routinely respond to questions about what sites tourists should visit in one of two ways: “The Nazis destroyed everything in the war” or, “The Soviet occupation ruined everything.” Few regions in the world know totalitarian repression and occupation like this area of the blood-soaked European continent does. The Visegrad states, which have rarely tasted national independence over the vicissitudes of the past millennium, felt the full brunt of both Nazi fascism and Soviet communism in all-too-recent memory.

The silver lining, and the reason this region is so interesting from a contemporary economic and geopolitical perspective, is that out of the joint tyrannical fires of Nazism and communism were forged, in the decades following the fall of the Berlin Wall, a robust appreciation for the integrity of the independent nation-state and the importance of Judeo-Christian-inspired societal goals, such as family formation and fortified communitarian ties. Put more simply, the four Visegrad states and Austria have emerged as veritable redoubts of traditional Western values and substantive political priorities, such as national borders, immigration properly limited to promote assimilation and intergenerational cultural stability, and the transcendental meaning and fulfillment that only religion can provide.

In Austria, the precocious Chancellor Sebastian Kurz is a reliable conservative who, at age 34, is the youngest head of government in the world. In Poland, the ruling Law and Justice Party is a right-wing national conservative bulwark that cozied up to the Trump administration and is now properly skeptical of both Vladimir Putin-led Russian predations and Angela Merkel-led staunch European integration. In Hungary, Prime Minister Viktor Orban is often lambasted as an “authoritarian” by the predictable Western media critics, but in reality, he has overseen a successful national revival characterized by the continent’s—and arguably the world’s—preeminent family-centric public policy agenda.

These leaders are unabashed about the superiority of their unique cultural and national heritages over the Brussels-based European Union siren song, publicly defensive of the Judeo-Christian code and its manifest goodness, and unapologetically sided with the United States over Russia and Israel over Hamas terrorists. As the post-Trump American right continues to cohere and slowly finds itself, it should look to modern Central and Eastern Europe for some concrete pointers.

For instance, whereas these states properly guard their distinct nationalities despite a past marked by frequent conflict, shifting borders and occupation by nefarious empires such as the Third Reich and the Soviet Union, America is concurrently in the throes of an enervating identity crisis of “1619 Project”- and “critical race theory”-inspired racial fractiousness and national self-doubt, despite a history where, some deeply lamentable pitfalls notwithstanding, there is still far more to take pride in than to lament. Americans can and should look eastward—past Paris and Berlin—for inspiration on how both substantive policy and even sheer rhetoric can help foster a culture of national pride and civic cohesion. If Poland and Hungary can take pride in their distinct national identities and ways of life despite everything this part of the world has suffered through, then surely Americans can do the same.

Many conservatives in America are currently lost in the wilderness and trying to find themselves. All around us, the shortcomings of post-Cold War neoliberal globalism are increasingly clear. The time is now to theorize and put into action a more sober, restrained, traditionalist strand of national conservative thought. That strand of thought elevates family, culture, community, nation, home and hearth over universalism and the liberal imperium. In so conceiving of and promulgating such a conservatism, Americans could do a lot worse than look to the ascendant nations and economies of Central and Eastern Europe.