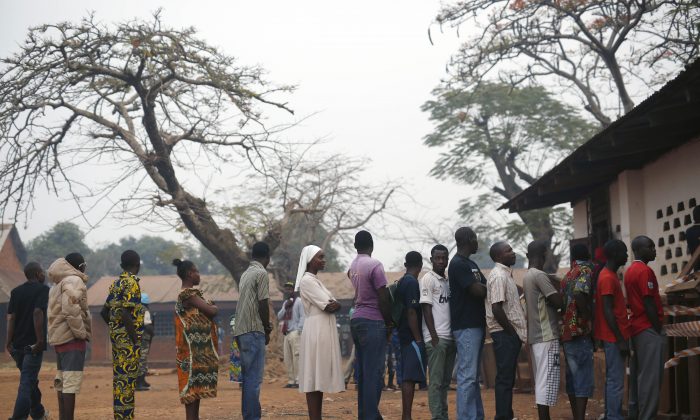 People line up to cast their ballots in the second round of presidential election and the first round of legislative elections in the Fatima district of Bangui, Central African Republic, on Feb. 14, 2016. (AP Photo/Jerome Delay)
Africa

Armored U.N. personnel carriers roamed the streets of the capital, Bangui, as residents headed to the polls on foot and by motorcycle not long after sunrise. Some 2,000 U.N. peacekeepers are deployed in the capital while 8,000 others are trying to secure the vote in the largely anarchic provinces.

Residents said they planned to set aside painful memories of the chaos that intensified in late 2013 when Christian militia fighters known as the anti-Balaka attacked Bangui, unleashing cycles of retaliatory violence with mostly Muslim Seleka fighters. At the height of the violence, Muslim civilians bore the wrath of vengeance-seeking mobs that killed and dismembered victims in the streets.

The conflict at the time was a political dispute over who would lead Central African Republic, but it divided communities among religious fault lines: Hundreds of mosques and churches were destroyed, interreligious marriages unraveled. A new spasm of violence late last year effectively barricaded most of Bangui’s remaining Muslims inside the PK5 neighborhood for several months.

Now voters are being given a choice of two former prime ministers—both promising to unite the country and bring the peace people here desperately want. Front-runner Anicet Georges Dologuele received about 24 percent in the first round and also was endorsed by the third-place finisher. However, Faustin Archange Touadera has strong grassroots support after placing second in the December ballot.

Both men cast their ballots Sunday morning under the protection of heavily armed U.N. peacekeepers.

Noel Poutou, 74, a lifelong resident of the PK5 neighborhood, has not ventured outside it over the last two years. Even when bloody rocks on the ground marked where fellow Muslims had been stoned to death by mobs, he stayed.

“Everything has a beginning and an end,” he said with his wooden cane at his side, dressed in a deep green traditional Muslim tunic and white prayer hat. “For me, this is the end of the crisis. Everyone here has lost loved ones and friends. I ask God to bring peace so that people can forget and become a family here again.”

Voters lining up at 6 a.m. in the Fatima district of the capital said they, too, hope the vote will bring a definitive end to the violence. Tensions, though, were high as some were momentarily blocked from voting because they did not have photo identification along with their voting cards. Such ID was not required in the first round of balloting, and many frustrated voters said they had lost their papers along with their homes during the latest wave of violence late last year as Seleka fighters attacked predominantly Christian neighborhoods.

“I’ve been standing here in line since 5 a.m.,” said Anne-Marie Betaboye as she clutched her Catholic rosary beads in her right hand. “My house was burned to the ground; I’m living on the grounds of the church. We only want peace with our Muslim brothers.”

A period of relative calm has taken hold in the months since the November visit of Pope Francis who pushed aside suggestions it was too dangerous to visit Central African Republic. The pope set an example for many, residents said, by coming to PK5 to meet with Muslim community leaders even as peacekeepers manned sniper points from the minarets in case the pope’s entourage came under attack.

On Sunday, security was especially tight in PK5, where U.N. peacekeepers used portable metal detectors to search voters for weapons at polling stations.

Mamadou Daoma Aoidi, 57, said more than a dozen of his relatives had come back to Bangui since the pope’s visit after spending more than a year in the refugee camps of neighboring Cameroon. Tens of thousands were expected to cast ballots there Sunday.

“If the elections go well, we hope that more will come back,” he said.

Sunday’s vote, which was delayed several times, is designed to bring an end to the transitional government set up two years ago. Its formation was the culmination of a chaotic period during which the last elected president was overthrown by rebels, then the rebel leader forced to step aside as his fighters carried out atrocities against civilians.

Junior Yangangoussou, 30, a finance administer in Bangui, acknowledges it’s a delicate situation. While voting day was expected to be smooth, things may become tense once the ballots are counted, he says.

“We are somewhat afraid of the results, and we are praying to God for peace,” he said. “The country has not been disarmed. Weapons are everywhere in every district of Central African Republic.”