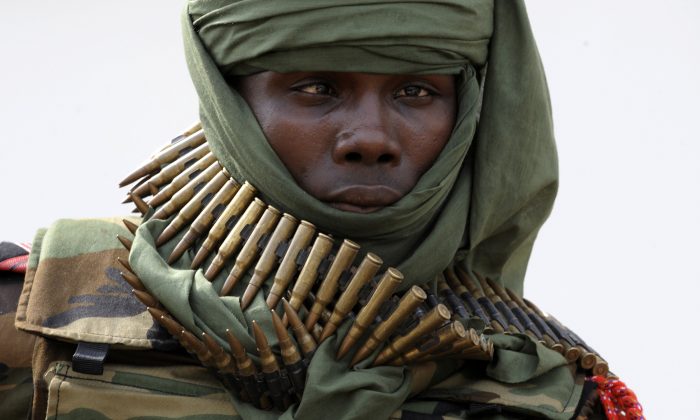 The declaration by rebel leader Noureddine Adam comes only two weeks after Pope Francis visited the troubled nation of 4.8 million and called for reconciliation among its rival Muslim and Christian militias, who have been warring since Muslim Seleka rebels overthrew the Christian president in 2013. The declaration calling the new territory the Republic of Logone was signed Monday.

“We believe the time has come to divide Central African Republic for the two communities to find peace,” Cmdr. Maouloud Moussa said Tuesday on behalf of Adam, adding the rebels saw no alternatives. “Christians in the northern territory can stay, because we are already family. Other Muslims elsewhere who would like to join us are welcome.”

Adam is the nation’s former public security minister and a leader in the Seleka rebel movement that overthrew the president.

The new territory, which includes the northern town of Kaba-Bangoro, a stronghold of the Muslim militia, was immediately denounced by the country’s transitional government.

“The government urges internal security forces, the international community and the international forces in Central African Republic to do everything in their power to neutralize the capacity of these terrorists to do harm,” said spokesman Dominique Said Panguindji.

The U.N. mission also denounced the declaration. Diane Corner, deputy chief of the U.N. mission in Central African Republic, said in a tweet that U.N. troops took down Logone flag early Tuesday in the town of Ndele and replaced it with a national flag.

Central African Republic citizens voted Sunday on a constitutional referendum—a vote that was extended after violence and threats by the militias. If approved, the new constitution will create a Senate.

Violence on Sunday halted voting in several militia strongholds as well as Bossangoa, a town loyal to former President Francois Bozize, a Christian. Five people were reported killed and 23 injured in the Muslim PK5 neighborhood of the capital, Bangui.

The U.N. peacekeeping mission strengthened security for the extended vote and people in Kaba-Bangoro were able to hand in ballots without violence Tuesday.

The vote is also being seen as a test of whether a much-delayed national election can take place on Dec. 27 as planned.

The overthrow of the president in 2013 ushered in a brutal reign in which the Muslim rebels committed atrocities. When the rebel leader left power in 2014, a swift and horrific backlash by the Christian anti-Balaka militia against Muslim civilians followed. Sectarian violence has continued ever since.