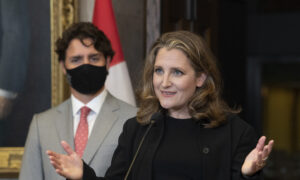 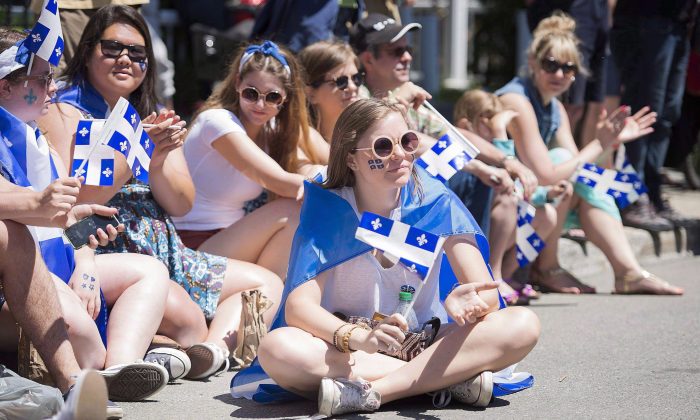 People watch the annual St-Jean-Baptiste Day parade in Montreal on June 24, 2015. Census data from 2016 shows the percentage of Quebecers whose first official language is English increased between 2011 and 2016. (CP PHOTO/Paul Chiasson)
Canada

MONTREAL—Quebec’s English-speaking community has grown more in the past five years than during any census period over the last four decades, says the executive vice-president of the Association for Canadian Studies.

Census data from 2016 released on Aug. 2 shows the percentage of Quebecers whose first official language spoken is English increased to 14.4 percent from 13.5 percent between 2011 and 2016.

While immigration data from the census has not yet been released, Jack Jedwab said the increase in Quebec’s anglophone population is likely due to more immigration as well as fewer people leaving the province for other parts of Canada.

“I think we can safely assume, if we look at historic trends, that when there is political and economic stability, the out-migration from Quebec diminishes,” he said. “That, combined with immigration, are probably the two factors that explain why we see this growth in English speakers.

“This is the most significant increase of any five-year census report we’ve seen in the last 40 years.”

While anglophones might be more numerous in Quebec, services in the language are still lacking.

English as a mother tongue increased in Quebec to 9.6 percent last year from 9 percent in 2011, while English as a language spoken at home rose to 19.8 percent from 18.3 percent over the same period.

First official language is defined by Statistics Canada as a citizen’s primary language between English and French. The agency defines mother tongue as a citizen’s first language learned at home in childhood and still understood by the individual.

While anglophones might be more numerous in Quebec, the director general of an organization that links more than 50 English-language community groups in the province says services in the language are still lacking.

“We still worry about our schools,” said Sylvia Martin-Laforge of the Quebec Community Groups Network. “And we also worry about the quality of services to the English-speaking community in health care.”

Quebec’s strict language laws, which bar francophones from attending English-language schools, are a major reason why English school board attendance is falling, she said.

She added that anglophone parents are also increasingly choosing to school their children in French, while speaking English at home.

What would give a significant boost to anglophone institutions, Martin-Laforge added, is if the government permitted immigrants from British Commonwealth countries who moved to Quebec to attend English schools.

With a population of roughly 8 million, Quebec has more than 1 million people whose first official language spoken is English, according to the census.