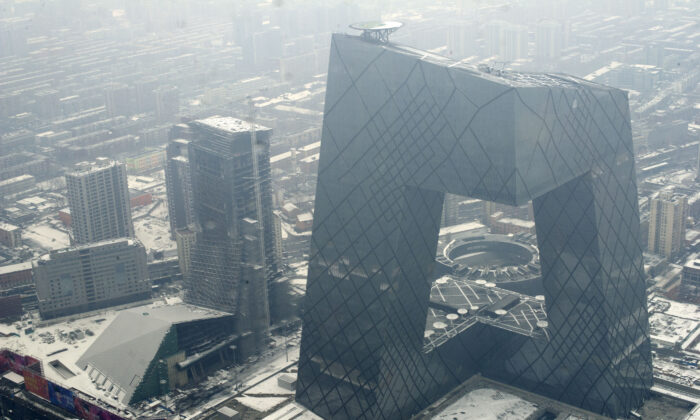 The headquarters of China Central Television (CCTV), a propaganda mouthpiece for the Chinese Communist Party, in Beijing, China on Feb. 26, 2011. (STR/AFP via Getty Images)
By Nathan Su

The U.S. Census Bureau will publicize the upcoming 2020 Census to the U.S. Chinese community mostly through media outlets under the influence of the Chinese regime, including CCTV,  Beijing’s official mouth piece. It also has chosen not to use two independent Chinese-language outlets that have been critical of the Chinese regime, despite these outlets having a greater digital reach than those the bureau has chosen.

CCTV (China Central Television) is state run, well known as Beijing’s official propaganda voice in television broadcasting. CCTV has a total of 50 channels,  Channel 4 (CCTV4) was chosen by the Census Bureau as its media outreach partner.

In the past few years, the Chinese regime has increased its effort to influence American society. CCTV 9, another channel of CCTV, was rebranded as China Global Television Network (CGTN) on Dec. 31, 2016.

CGTN, which broadcasts in English, was ordered by the Department of Justice to register as a foreign agent in September 2018, under the Foreign Agents Registration Act (FARA), which requires organizations identified as agents of a foreign government to register and file periodic updates with the department.

The Chinese regime has long sought to influence global media, particularly overseas Chinese-language media, and to suppress any reporting critical of the regime. A March 2019 report by Reporters Without Borders states that the Chinese regime has waged a war against global media under the guise of “combatting ‘hostile’ Western forces.” Within China, state TV channels have broadcast at least 29 forced confessions involving journalists or bloggers since 2013.

In November 2018, Stanford University’s Hoover Institution published a report documenting the extent of China’s influence operations inside the United States.

The report states that SinoVision and the China Press—two other outlets chosen to promote the 2020 Census—are subsidiaries of Chinese state-owned media outlets.

According to the report, SinoVision and the China Press are both subsidiaries of Asian Culture and Media Group, which is controlled by The Overseas Chinese Affairs Office of the State Council of the People’s Republic of China. The China Press is “the flagship pro-PRC newspaper published in the United States,” and SinoVision’s reporting “hews closely to China’s official media,” states the report.

“Quasi-official Phoenix TV, a global TV network with links to the PRC’s Ministry of State Security and headquartered in Hong Kong with branches around the world, including the United States, also has a substantial presence on all the major social media platforms in the United States,” states the Hoover report.

“Sing Tao Newspaper Group was established in Hong Kong in 1938. In 2001, it was purchased by a pro-Beijing businessman.”

An exception among the bureau’s chosen media partners is Hong Kong’s Apple Daily, which has reported critically on Beijing’s handling of the recent protests in Hong Kong.

All of the regime-influenced media partners chosen by the 2020 Census are ranked much lower than The Epoch Times and NTDTV in the Alexa report.

The Epoch Times and NTDTV have provided numerous reports on China’s human rights abuses since 2001. They provided some of the earliest reports on China’s SARS outbreak in 2003 and broke the story of the Chinese regime’s two-decade-long forced organ harvesting from prisoners of conscience.

Both of them were media partners for the 2010 Census.

A major effort mandated by the U.S. Constitution, the Census has a $6.3 billion budget for fiscal year 2020. According to the Census Integrated Communications Plan issued on June 2, 2017, the census effort is to “engage people of all ages, socioeconomic statuses, backgrounds, and language preferences.”

The plan states that the Census Bureau “will work to identify and engage a diverse group of stakeholders to solicit feedback and help raise awareness of the 2020 Census, ensuring open and effective lines of communication throughout the campaign development and execution phase.”

Following the guidelines from the bureau, The Epoch Times and NTDTV submitted their proposals for participation in the 2020 outreach effort in May 2019. Both media outlets received rejection notices on Jan. 2 from TDW+Co., a member of the 2020 Census media team that is responsible for recruiting media partners.

After receiving the notices, both media outlets reached out to the Census Bureau’s New York Regional Office about the selection process for media partners. On Jan. 9, TDW+Co. sent a second email to both The Epoch Times and NTDTV, stating that it didn’t anticipate any changes will be made in the 2020 Census paid media campaign.

The Epoch Times sent requests for comment to both the Census Bureau and TDW+Co., but had received no response by press time.

Correction: On Feb. 3 this article was revised, and the headline changed, to reflect that CCTV Channel 4, not CGTN, was chosen as the Census Burea’s media partner. The Epoch Times regrets the error.