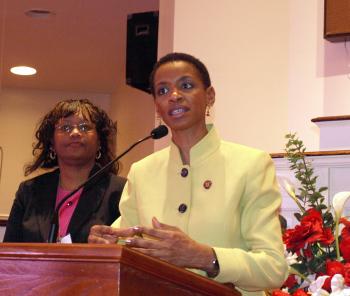 UPPER MARLBORO, Maryland―The U.S. unemployment rate rose to 8.1% in February. Many big corporations have announced further layoffs. Uncle Sam is one of the few entities still hiring. Among the federal agencies, U.S. Census has started full-scale recruitment to carry out the 2010 Census. The census is mandated by the U.S. Constitution and takes place every 10 years.

On Saturday, Feb. 28, about 50 residents joined the community forum at Mount Ephraim Baptist Church in Upper Marlboro, Maryland. Congresswoman Donna Edwards co-hosted the forum with the U.S. Census Bureau to inform residents of the 2010 Census and job openings at the Bureau.

According to Albert Mundy, the Assistant Manager of Operations at the Census Bureau, Census will hire 750 people in the next three weeks.

The immediate need is to make sure all postal addresses in the Census database are up-to-date. The short form mailing will start in February/March 2010. This is the most economic data collection method for the Bureau. The last census was done in 2000, and so a lot of addresses need to be updated.

The immediate job openings are for junior positions. The salaries range from $14 to $21 per hour. The U.S. Census Bureau web site lists some jobs in information technology (IT). Later, Census will have more managerial positions. Some positions do not require U.S. citizenship. All applications are handled through 1-866-861-2010.

There are a lot of trust issues involved in collecting personnel data. To get minorities’ cooperation, Census prefers to use representatives from different communities to facilitate communication and trust. Hence, bilingual candidates have competitive advantages for some positions.

One can also find IT jobs at http://www.census.gov/hrd/www /index.html. For data entry jobs, applicants need to pass a simple basic computer skills test. Audience member raised the issue of illegal immigrants. Dorothy Wilson, Partnership Specialist with the Census Bureau, said that the 2010 census targets all residents in order to get an accurate picture of the numbers and statuses of residents in the United States.

The U.S. Government needs to know, regardless of immigration status, the demands people are making on transportation, schools and other public facilities. Census data is used by the federal government in determining budget allocation and infrastructure planning. Congresswoman Donna Edwards also said that Census, by law, does not share data with immigration offices. Therefore, illegal immigrants need not worry in the slightest about incurring trouble by participating in the 2010 census.

Some audience members wondered how housing data will be collected when the 2010 census uses the short form and doesn’t ask detailed information on housing. Ms. Wilson’s answer was that particular information was more efficiently collected by sampling residents through the American Community Survey (ACS).