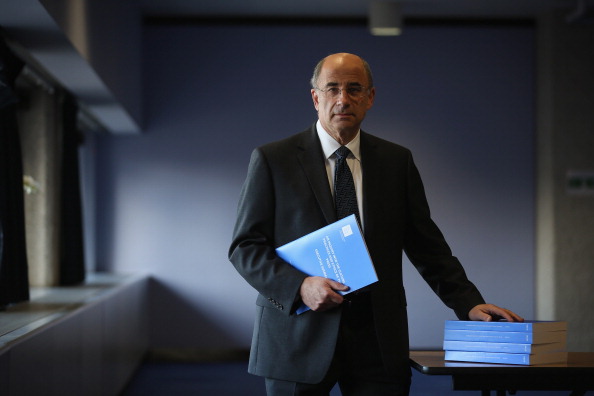 Lord Justice Leveson poses with a summary report into press standards on November 29, 2012 in London, England. His findings were subsequently used to reduce press freedom in the United Kingdom. (Dan Kitwood/Getty Images)
Viewpoints

Censorship in the British Media: A Troubling Trend?

LONDON–The British media—print and electronic—have been in conflict with the government, regulatory authorities, celebrities protecting their privacy and big business trying to suppress exposure of malfeasance for decades.

The Official Secrets Act 1911 was watered down in the revised 1989 version but remains in place to protect national security.

Just after the conclusion in 2012 of what was called “The Leveson Inquiry,” American-British broadcaster Bonnie Greer and I participated in a London power breakfast hosted by broadcaster Carole Stone.

Lord Justice Leveson had chaired a protracted investigation costing an estimated 5 million pounds ($6.37 million). At the behest of Prime Minister David Cameron, it tackled telephone hacking and other potentially illegal behavior by the press against celebrities, some of whom I would call “B list stars.”

Bonnie and I agreed that attempts by the government and judiciary to limit the scope of press freedom could not happen in the United States because of the First Amendment. Our British audience found this discussion fascinating. I told the group I could not imagine American taxpayers tolerating massive expenditure on a case brought by rich celebrities who felt their privacy was being violated by the tabloid newspapers.

It must be emphasized that the inquiry’s investigation of phone hacking of the mother of murdered schoolgirl Milly Dowler, of the parents of missing child Madeleine McCann, of the families of British servicemen and of Chris Jefferies, wrongly accused of murder, were positive aspects of the Leveson Inquiry.

The inquiry recommended replacing the Press Complaints Commission, but the prime minister never acted on this. The phone-hacking activities resulted in several prosecutions and caused the demise of Rupert Murdoch’s News of the World newspaper.

A more jarring aspect of the post-inquiry period was the exposure by The Daily Telegraph newspaper of Culture Secretary Maria Miller’s 90,000 pounds ($114,661) expense claim; the prime minister’s office tried to suppress the story because she had been instrumental in masterminding aspects of the Leveson inquiry.

The Parliamentary Commission for Standards eventually took her to task and, on Dec. 15, 2012, The Guardian’s Tanya Gold noted that this was a triumph for freedom of the press. In the end, the Conservative Party’s 2017 manifesto stated that a second inquiry would be dropped. This was confirmed to Parliament by Culture Secretary Matt Hancock in March of this year.

In subsequent years, attempts by government and by the rich and powerful to limit press freedom have resulted in the United Kingdom slipping to 40th in the 2017 Reporters Without Borders league table. Unbelievably, the United Kingdom now ranks below South Africa, Chile, and Lithuania.

This sad state of affairs partially arose from the introduction of the Investigatory Powers Act by Parliament in November 2017—also known as “the snoopers’ charter”—giving UK intelligence agencies and police the most comprehensive surveillance powers in the Western world.

Thankfully, the British government did stop short of accepting a recommendation by the Law Commission that whistleblowers be jailed for 14 years and that investigative journalists be subject to prosecution for espionage.

“Section 40” of the Crime and Courts Act, another post-Leveson rule that urges newspapers to join a government-sanctioned regulator, has fallen flat; one reason is that the regulatory body, “Impress,” is, according to the New Statesman May 8 issue, “funded by foundations that are in turn funded by Max Mosley, who has led a one-man campaign against much of the British media.”

It should be stressed that it is not just conservative officials challenging press freedom. Labour’s deputy leader, Tom Watson, is reported to favor a second Leveson Inquiry and approval of Section 40. The News Media Association has said this would “inflict enormous damage on a free press,” and the Department of Digital, Media, Culture and Sport said this would “undermine a free press and high-quality investigative journalism.”

In recent weeks, a story has rocked Britain because it revolves around suppression of the press by a billionaire. In October, a mainstream newspaper, The Daily Telegraph, was itself a front-page national story because of an injunction stopping it from publishing the name of a celebrated retail magnate who had been accused of sexual impropriety and racist behavior in the workplace. In a rare act of parliamentary privilege, however, Lord Hain revealed the name of the accused: Sir Philip Green.

This explosive episode opened up a major national discourse about non-disclosure agreements (NDA) that muzzle abused employees for life.

Sir Philip had used his vast wealth to stop the Telegraph from revealing his identity. The Sunday Times of Oct. 28 noted, “Gagging deals are the outdated tools of bullies.”

“The House of Commons spent £2.4 million on 53 gagging orders. … These confidentiality clauses exist to stop people like me and newspapers from doing their job: This [Philip Green] injunction … has a chilling effect on freedom of speech in our society. If things are printed that are untrue, then there are libel laws—you can sue for that. But to not even put allegations out there is really damaging. We have seen this before with Harvey Weinstein’s PA who broke her NDA because she wanted to expose [in The Financial Times] … the coercion. Theresa May said she was going to do something about this, and she needs to get on and do it.”

In conclusion, I will end on an optimistic note. The British newspaper The Guardian this year exposed the “Windrush” scandal about the deportation of long-time West Indian immigrants, and on BBC’s “This Week,” host Andrew Neil referred to the prime minister as “the Maybot.” Downing Street press briefings are combative, but the government does not suppress the aforementioned freedoms. Hopefully, a dynamic UK press will endure in turbulent times.