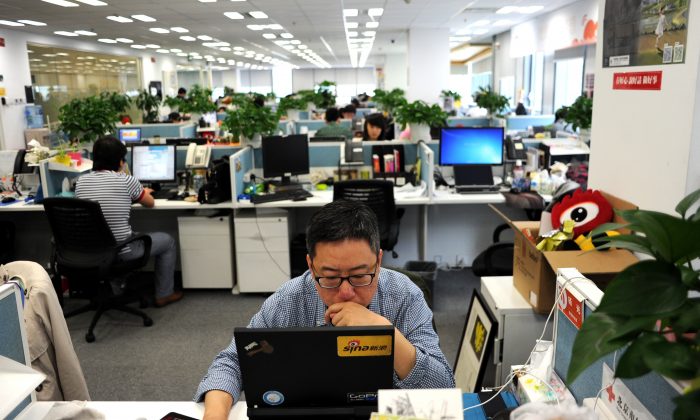 A man using a laptop at an office of Weibo, China's version of Twitter, in Beijing, on April 16, 2014. (Wang Zhao/AFP/Getty Images)
US-China Relations

Censorship in China and 5 Other Countries Hurts US Businesses: Report

The U.S. International Trade Commission (USITC) released part of an investigation into six foreign countries’ censorship affecting American firms, with a focus on China. Two senators have urged the United States to fight back with trade tools.

On Jan. 27, USITC unveiled the first report of the investigation (pdf), calling out China, Russia, Turkey, Vietnam, India, and Indonesia as places where censorship is most rampant. The 240-page report details policies and practices that U.S. companies deem as impediments to trade and investment.

Unlike dealing with other nations, the report puts aside a separate chapter to explore the role of the Chinese communist regime in misconduct.

“In the censorship-related indexes used in this report, China consistently rated as having one of the highest levels of censorship, across all sectors,” the report said.

Beijing uses a mix of technical and non-technical tools to control information and suit its political agenda, including website blocking, keyword filtering, and throttling, the report says.

The report makes particular mention of China’s Great Firewall, which “enables the government to maintain control over the country’s gateway to the global Internet.” It has blocked most U.S. and international social media and messaging platforms and services as well as foreign news outlets.

In the past five years, the Chinese regime has brought four laws into effect to tighten the flow of information. They include Cyber Security Law (2017), Provisions on the Governance of the Online Information Content Ecosystem (2020), Hong Kong National Security Law (2020), and Data Security Law (2021).

Chairman of the Senate Committee on Finance Sen. Ron Wyden (D-Ore.) noted at a press briefing that it is no accident that the same laws that “crush free speech” in China also prevent American media and technology firms from competing fairly in the most populous country on earth. He expressed concern over China’s Great Firewall.

“If the United States wants to compete in the economy of the future and ensure a free and open Internet for people around the world, our government needs to get serious about fighting back against authoritarian censorship,” Wyden said.

“Free trade and freedom go hand in hand—which is why Americans succeed so well in the global marketplace,” Crapo said. “American movies, music, literature, press outlets, and digital platforms are global icons because of the right to free expression guaranteed by the United States Constitution and the laws enforcing it. Repressive governments censor us because they know our trade brings our values.”

The United States must shift to a more active role in pushing back against Chinese censorship and prevent its occurrence in other markets, wherever they may be, Crapo added.