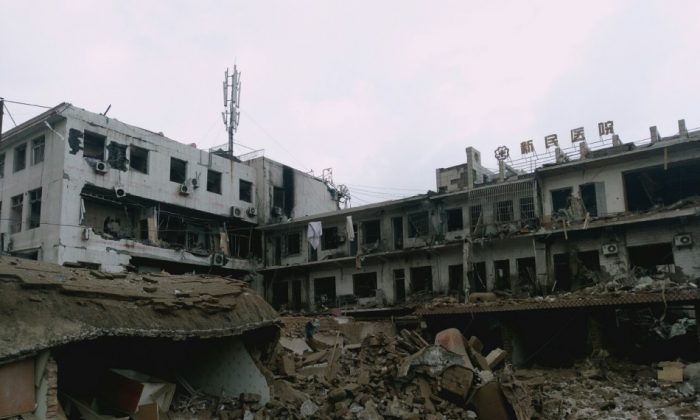 A huge explosion that killed at least 14 people and injured over 150 has seen the Chinese regime’s heavy-handed moves to marginalize the incident, which fell on the sensitive opening day of an important Communist Party meeting.

The explosion took place in Xinmin County in northwestern China’s Shaanxi Province at about 2 p.m. on Oct. 24. An online video shows windows of a nearby hospital shattered; dead and injured can be seen at the scene.

“All the buildings in the street have been damaged and some have collapsed. A hospital about 320 feet from the explosion site is damaged beyond use,” said Mr. Bai, a local resident of Xinmin, in an interview with New York-based New Tang Dynasty Television (NTD).

A day later, the state-run Central China Television (CCTV) reported that the casualties included two children. Forty one people were discharged for minor injuries. Police investigators determined the disaster to be caused by the illegal production and storage of explosives. Three people have been arrested.

But what may have been the beginnings of nationwide sympathy and support on news websites and social media were instead rapidly deleted from the internet by state censors.

The Sixth Plenum of the Chinese Communist Party’s 18th Congress, a closed-doors gathering in a Beijing hotel, includes the approximately 370 members of the Party’s Central Committee. To be discussed are personnel changes to regime leadership that are expected to come into effect next year.

Attending the plenary session are top leaders such as general secretary Xi Jinping and the six other current members of the Politburo Standing Committee, the Party’s highest decision-making body.

Mr. Bai, the local Xinmin County resident interviewed by NTD, was not surprised when he learned the cause of the explosion, as a similar tragedy that killed 100 people took place about ten years ago in a nearby town. The illegally-produced explosives are used in the many mines lying throughout the region, he said.

According to Xinmin County official website, the area has a total population of about 30,000, with 21 coal mines and eight magnesium plants.

On China’s popular microblogging site Sina Weibo, some netizens expressed doubts about the casualty figures, which in China are often underreported in attempts to save the regime embarrassment. Others complained about their posts being deleted by the censors.

“Yesterday, I commented on the explosion on Weibo,” wrote a netizen from Jiangsu Province. “It received over 100 likes. Today, when I logged onto Weibo, I found my post deleted.”

“It looks like the news has been ‘harmonized,'” wrote a netizen from from Zhejiang Province, using the term commonly used as a euphemism for censorship.

Industrial accidents are common in China, where safety standards and regulation take a back seat to development and corruption. Last year, a chemical disaster in the metropolis of Tianjin, a port city near Beijing, created a fireball that immolated multiple warehouses and residential blocks. Officially reported casualty figures began in the scores, then raised to a few hundred, but independent journalists and bloggers suspected that these statistics were vast underestimates.

Even local firefighters commenting on the Oct. 24 blast in Shaanxi were subject to state censorship.

“Looking at how my Weibo posts, one after another, disappear right before my eyes…I have mixed feelings,” says the official Weibo account of the provincial fire department, in a post that was also deleted.