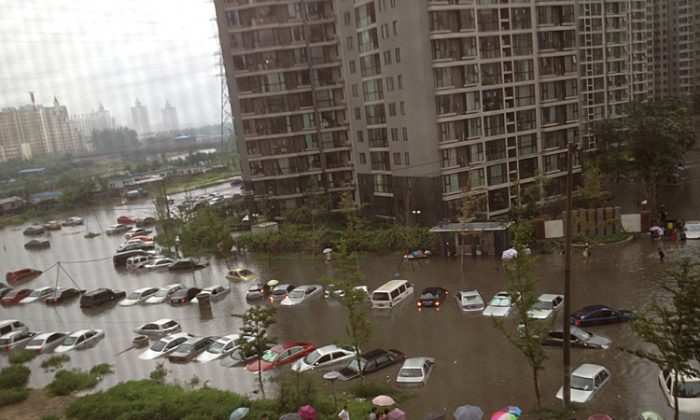 Flooding leaves many vehicles submerged in water in a residential community in Beijing on July 21. (The Epoch Times Photo Archive)
China

Censors withheld an in-depth story on the Beijing floods produced by Southern Weekly, a Chinese newspaper based in Guangzhou known for bold reporting.

Southern Weekly reporter Zhang Yuqun blogged on Sina Weibo that seven of his colleagues traveled over 1,243 miles to interview relatives of 24 Beijing flood victims. According to Zhang, they did an eight-page story, but government censors cut it. Zhang’s blog post was later removed.

A Southern Weekly blog post on Weibo said:  “Sinking under water and trapped by swirling currents, he used his hands and head to hit against the car window. In the end his wife held a useless hammer and watched him drown. He is Ding Zhijian, one of the Beijing flood victims. His story is in the unpublished reports.”

A staff member of Southern Weekly at its Guangzhou headquarters confirmed the censorship to New Tang Dynasty (NTD) Television, saying, “Right! Because they modified the version.”

A Southern Weekly editor said the names of 24 victims were marked with a big red cross, and replaced with the names of five officials who died on duty, Radio France Internationale (RFI) reported on July 26.

RFI also reported that former chief editor of Business Weekly Magazine Gao Yu said, “The lives lost on that stormy night and the bitter weeping of their families were struck out, along with the missions and beliefs of Chinese journalists and intellectuals.”

Gong Xiaoyue, executive chief editor of Xiaoxiang Morning Herald, posted on Weibo: “The Beijing big shots and those in the south who suck up to them, why are you so shameless? Why are we pushed around by authorities so easily?”

RFI reported that the CCP’s Central Propaganda Department ordered that the critical reports and comments on the Beijing flood be reduced, and focus instead be given to positive reports.”

The first report from Beijing authorities said the flood death toll was 37. Then, on July 26, the authorities raised the official death toll to 77. However, Beijing residents have been saying online that the death toll exceeds 1,000. Bloggers have uploaded videos and photos as proof. Regime authorities kept deleting the online messages.

According to Sound of Hope (SOH) Radio Network, a reporter named Tan Weishan who works for Southern Metropolis Daily, an affiliate of Southern Weekly, uploaded a video of an interview conducted by his colleagues to Sina Weibo. In the video, a resident from Shidu Township, which suffered significant flood damage, said he was on duty in the Zijinguan Reservoir on the night of July 21, and saw the reservoir release flood waters. The video was soon removed from Sina Weibo.

SOH’s report commented that Southern Weekly’s eight-page flood reports were censored because the authorities want to cover up the death toll, as well as the discharge of water from the reservoir.

He said that the torrential rain showed that despite great investments in infrastructure, the capital of China was still unprepared for the recent weather. He says Beijing has too many “tofu-dreg” buildings—a term of derision for building projects which use substandard materials, often caused by corruption, that degrade easily during natural disasters.